ANN ARBOR, Mich. – The Iranian government replied to Trump’s assassination of Iranian military commander Qasem Soleimani on Tuesday by firing some 15 ballistic missiles at Ain al-Assad base in al-Anbar Province and at another Iraqi base at Erbil in Iraqi Kurdistan. The bases are Iraqi and mainly house members of the Iraqi military, but also host US troops. As of this writing very early Wednesday, there were no US deaths or casualties, but the Iranian press was claiming it had killed “80 terrorists.”

Notoriously flaky Sen. Lindsay Graham replied to the strikes saying that Iran had better “cut this crap out” or it would be “out of the oil business.” Rupert Murdoch-backed media poo-bah Sean Hannity also advocated striking Iran oil installations.

It is tragicomic that Graham and Hannity do not seem to realize that Trump already put Iran out of the oil business. Iran’s government feels that it has nothing to lose. Trump cut Iran’s exports from 2.5 million barrels a day in 2017 to a few hundred thousand barrels a day last fall. Petroleum receipts account for 70% of Iranian government revenue. 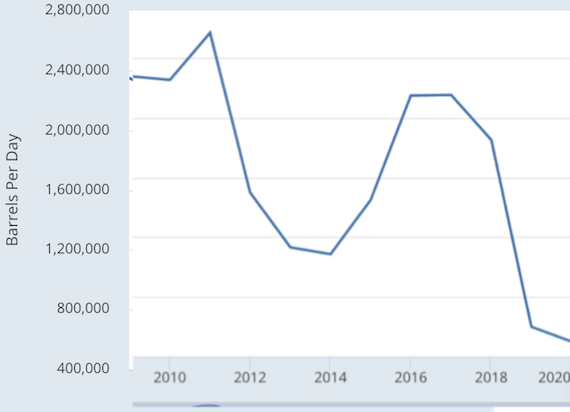 Trump began the war with Iran on May 8, 2018, when he breached the international treaty with Iran, the Joint Comprehensive Plan of Action (JCPOA). The treaty had forced Iran to mothball 80% of its civilian nuclear enrichment program, as a way of ensuring that the program was never militarized. In the three years leading up to the signing of the treaty, the Obama administration and the UN Security Council had put severe sanctions on Iran, which hurt the Iranian economy. In return for severely curtailing their enrichment program, the Iranians were promised that all sanctions would be lifted and that Iran would be integrated into the world economy. Trump breached the treaty even though the UN inspectors repeatedly certified that Iran was in full compliance with its obligations.

Trump then slapped the most severe economic sanctions on Iran ever applied to any country by another in peacetime. He strong-armed Japan, South Korea, Europe and India into not buying Iranian petroleum and threatened companies throughout the world with Treasury Department third-party sanctions if they traded with Iran. No one wants to be excluded from the $22 trillion a year American economy or to be forced to pay billions of dollars in fines, so everyone, including Europe, fell into line behind Trump’s “maximum pressure.”

These were no longer sanctions but a financial blockade. If you blockade a country and prevent its trade with naval ships, that is an act of war in international law. Trump blockaded Iran with financial instruments, but it comes to the same thing. Trump has been at war with Iran for 19 months. The Iranian economy is a shadow of its former self. Middle class families can’t afford needed medicines for loved ones.

Trump’s blockade on Iran has not the slightest legitimacy. It was not mandated by an act of Congress. There is no UN Security Council resolution preventing Iran from selling its oil on the international market. It is the caprice of a single person, and violates international laws and norms.

I have pacifist tendencies and wish countries could work out their differences nonviolently. But no country would accept this economic strangulation at the hands of another without striking back in some way, and Iran’s replies to Trump’s fingers around its windpipe have brought us to this pass.

It is puzzling that Iran would hit Iraqi military bases. Iran is an Iraqi ally and helped this same Iraqi army in its fight against the hyper-Sunni terrorist organizations, ISIL (ISIS). Are the troops at the base disproportionately Sunnis from al-Anbar province, and does Iran see them as Baath remnants or sympathetic to Sunni radicalism? Why call Iraqi soldiers “terrorists?” Iran has taken revenge on the US for declaring the Iranian Revolutionary Guards Corps, a government institution, a “terrorist organization.” Tehran has in return branded the US military a “terrorist organization.” Perhaps the Iranian press was saying it had killed 80 US troops, but this allegation seems untrue. In fact, the Iranian missiles are quite precise and Iran has good intelligence on where US troops are, so the IRGC deliberately avoided killing Americans, which it easily could have.

The geography of the two bases hit may be politically significant. Al-Anbar is an almost entirely Sunni Arab province dominated by the Dulaim tribe. Erbil is the capital of the Kurdistan Regional Government (KRG). The Sunni parties and the Kurdish parties boycotted last Sunday’s parliamentary vote to expel US troops. It is possible that Iran is sending these two blocs the message that it is not healthy for them to lobby to keep US troops in Iraq, and that if they do so they will be in the middle of a hot war. Hitting Erbil is otherwise hard to explain, since Iran and the Iraqi Kurds have generally good relations.

In any case, Iraqis are human beings as much as Americans and it is hard to feel much relief if in fact 80 of them were summarily blown away.

I was not expecting the Iranian government to hit out at the US so openly. Open conventional responses had not been its way of proceeding. My guess is that even the government of clerical leader Ali Khamenei was stunned at the magnitude of the public grief over the assassination of Gen. Soleimani, as millions came into the streets in the past couple of days. This fall there had been substantial unrest over a hike in gasoline prices, so the government may have liked the new solidarity of the people with it and become determined to capitalize on it by drawing out the conflict with Trump.

At the same time, the ayatollahs are riding a tiger. For the clerical government, having millions of angry people in the streets demanding revenge on the United States is a blessing and a curse. The newly-won solidarity could evaporate if the people felt as though they did not get a sufficiently harsh revenge. In fact, it isn’t clear that these missile strikes that did no real damage to the US will be sufficient to calm the Iranian masses down.

I think in the aftermath of these strikes, the government of Adil Abdulmahdi, Iraq’s prime minister, will be even more eager to expel US troops, lest Iran remain in the cross-fire between the US and Iran. Putting this pressure on Abdulmahdi is almost certainly one of the goals of the Iranian missile strikes.

There were 5,200 US troops in Iraq as the crisis began a week and a half ago, but several hundred appear to have been sent to Kuwait or will imminently be sent there. In a letter to the Iraqi government form the US military in Iraq, the American officers said that they wanted to “thin out” US troop presence in Baghdad, where they fear attacks by Iraqi Shiite militias, in preparation for leaving the country in accordance with last Sunday’s parliamentary vote. Secretary of Defense Mark Esper on Tuesday disavowed the letter, calling it a “draft.” Iraqi government officials, however, maintain that it was official, and that they even followed up about the Arabic translation, and that they will treat it as valid.