One Thing That Trump and Obama Agree On 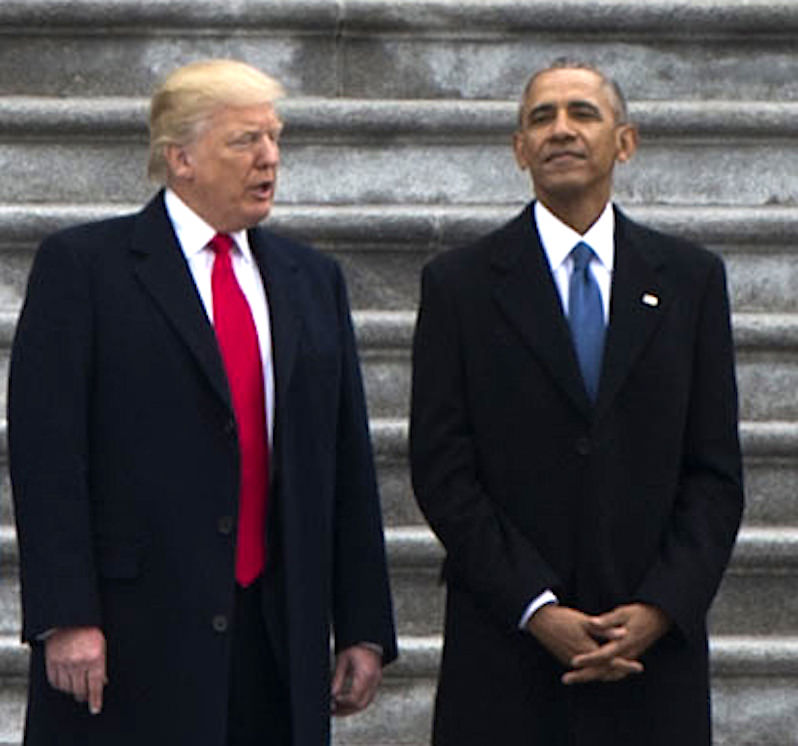 Update: The nonpartisan Congressional Budget Office said Monday that the Republican health care bill now in the Senate would leave an additional 22 million Americans without health insurance by 2026. The New York Times wrote, “Under the bill, the budget office said, subsidies to help people buy health insurance would be ‘substantially smaller than under current law.’ And deductibles would, in many cases, be higher. Starting in 2020, the budget office said, premiums and deductibles would be so onerous that ‘few low-income people would purchase any plan.’ “ – – –

Even President Trump agrees with his predecessor, Barack Obama, that the GOP-backed health care bill making its way through Washington’s legislative machinery can be characterized as “mean.” In fact, Trump claims Obama borrowed his language in calling the measure “mean” in a Facebook post by the former president this week:

“Simply put, if there’s a chance you might get sick, get old, or start a family—this bill will do you harm. And small tweaks over the course of the next couple weeks, under the guise of making these bills easier to stomach, cannot change the fundamental meanness at the core of this legislation.”

The New York Times reports that Trump is still confident that the bill to repeal much of the Affordable Care Act will pass, despite his previous denoucement of it:

“Health care is a very, very tough thing to get,” Mr. Trump said Sunday on Fox News. “But I think we’re going to get it. We don’t have too much of a choice, because the alternative is the dead carcass of Obamacare.”

But an issue of far more importance for many Americans is what the bill will mean for them. CNN Money has hashed out the logistics and describes how the bill could affect different demographics around the country:

Though senators promised to write their own repeal bill, their proposals largely mirror the House legislation. Both would radically overhaul Medicaid, effectively ending Medicaid expansion and greatly reducing federal support for the overall program. Both would get rid of the individual and employer mandates, as well as eliminate taxes on the wealthy, insurers and others.

But the Senate bill also differs in significant ways. It would provide subsidies based on income, cost of coverage and age, jettisoning the House plan to base assistance mainly on age. It would maintain Obamacare’s ban on allowing insurers to charge higher premiums to those with pre-existing conditions. And it would shore up the individual market for the next two years by allocating money for Obamacare cost-sharing subsidies and by creating a fund to help insurers cover high-cost enrollees.

The New Yorker also read between the lines of the new version of “Trumpcare” and pointed out lapses in the current political dialogue:

The Affordable Care Act’s biggest achievement came through its expansion of Medicaid and its sibling, the Children’s Health Insurance Plan. By raising the income-eligibility threshold for households and allowing states to cover low-income adults who don’t have children, some thirteen million people have been added to the Medicaid rolls since January, 2014. But the Senate bill would reverse this extension, over three years, starting in 2021. Additionally, it would drastically change the future financing of Medicaid, placing a cap on federal subsidies per person and putting strict limits on the subsidies’ future growth. (The funding formula is actually less generous than the one in the House legislation.) Like the House bill, these changes would cause millions of Americans to lose their health coverage. It would also generate hundreds of billions of dollars of cost savings over the next ten years.

And as the website Quartz points out, the measure, if passed, could amount to a windfall for 1 percenters—including those who populate Trump’s Cabinet. The bill would eliminate a 3.8% income tax on investment income for Americans who make more than $200,000 annually. The tax was established in 2010 by Obama to cover the costs of health care expansion:

“Their argument is that removing the tax would help increase investment in the US economy. It’s not clear that this is necessarily true; current maximum capital gains taxes are still historically low, below those imposed by Ronald Reagan’s tax reform in the 1980s and those in effect during the peak of US economic growth following World War II, albeit higher than under George W. Bush.

But what makes the tax cut fishy is that it will apply to any capital gains garnered in 2017, too. Why is that fishy? Because the spending cuts envisioned in the Senate bill won’t go into effect for several years. So cutting taxes starting this year will, despite the Republicans’ invocation of fiscal prudence, mean more government borrowing. And, since even the rich don’t have access to time machines yet, a retroactive tax cut won’t allow them to go back to the beginning of 2017 and decide to invest more to goose the economy.”

With all the uncertainties surrounding the health care bill, as well as many Republican senators voicing their dissent, it should come as no surprise that 51 percent of Americans now view Obamacare favorably, according to a Kaiser Family Foundation poll.