Netanyahu Boasts That He Destroyed Free Speech in America Israeli caretaker prime minister Binyamin Netanyahu, who has been indicted for corruption and is facing an election soon, just boasted that his ministry of strategic affairs has managed to undermine First Amendment protections for free speech in the United States by lobbying state legislatures to pass laws forbidding the boycott of Israel.

Anti-boycott laws of the Old South were used against Martin Luther King Jr. and other activists in the civil rights movement to keep African Americans subordinate and segregated. The right to boycott establishments over civil rights was upheld by the Supreme Court in 1982 in NAACP v. Claiborne Hardware.

It was also not for nothing that the American administration has taken this step together with us. In recent years, we have promoted laws in most US states, which determine that strong action is to be taken against whoever tries to boycott Israel.

Some 28 U.S. states have passed laws prohibiting the boycott of Israel and are attempting to punish this action by denying such individuals state contracts.

Gilad Erdan is the head of the ministry of strategic affairs, which has spearheaded the attempt to undermine the U.S. Constitution and make criticizing Israeli policy illegal in the United States. This effort is allegedly being aided by Mossad, Israeli intelligence. Mossad intensively spies on Washington, D.C., and may have compromising information on U.S. politicians.

The American Israel Public Affairs Committee, or AIPAC, is the main instrument of such Israeli policy pushes in the United States, and has never been forced to register as the agent of a foreign state, as U.S. law requires.

It should be noted that the anti-boycott laws do not only punish companies. Most states treat individuals providing them services as companies categorized as “sole proprietors.” University professors invited to speak on campus in the states with these horrid laws have been asked to sign statements saying they don’t boycott Israel before being allowed to speak. These procedures are the most dangerous assault on free speech in the United States since the McCarthy era.

Journalist Abby Martin has just launched a lawsuit against the University of Georgia for cancelling her speaking appearance when she declined to sign a pledge saying she would not boycott Israel.

I wrote recently that “in the past 23 months, Palestinians in Gaza have been demonstrating weekly, and Israeli army snipers have shot down over 8,000 them, leaving many crippled for life and killing over 200. Most of those shot were peaceful demonstrators posing no danger, who simply came into a zone the Israeli army arbitrarily declared off limits, even though it was inside Gaza. Victims include children, women, medics, journalists and other nonviolent noncombatants.

Criticizing these policies, which everyone concerned with human rights in the world does, is not equivalent to disliking Jews. The only reason the question even comes up is that the Israel lobbies and the organized-crimelike Likudniks have attempted to deflect any obstacle to their colonization drive by smearing human rights activists as bigots for daring oppose their monstrous plans.

As I have noted, “not only are no sanctions being placed on Israel for these naked war crimes, but the lawmakers in the U.S. are willing to take large scissors to the U.S. Constitution on behalf of the Likud Party, protecting it from any civil society attempt to hold it accountable.”

In response to such war crimes, including the Israeli colonization of the Palestinian West Bank, civil society around the world has adopted the tactics of boycott, sanctions and divestment (BDS) against Israel. It has especially resorted to these tactics precisely because powerful world governments refuse to intervene to stop Israeli crimes against humanity.

I earlier reported that “Ben Kesslen at NBC News reported that the University of Arkansas-Pulaski Technical College cancelled their ads with Little Rock’s Arkansas Times because owner Alan Leveritt won’t sign a pledge that his business does not boycott Israel. Leveritt doesn’t boycott Israel, but he considers a state law passed by Arkansas and 27 other states to be unconstitutional and he would rather risk his business than surrender his First Amendment rights.”

The loss of the state contract was devastating to the newspaper. It is important to underline that Alan Leveritt does not boycott Israel. He simply refuses to sign a pledge that restricts his freedom of speech and which is imposed by the state government, on First Amendment grounds. The Arkansas Times is a centrist newspaper in a conservative state, so that Netanyahu has actually managed to reach into the heart of America and strike at its media diversity by shredding the U.S. Constitution (on which state constitutions are based when it comes to freedom of speech). 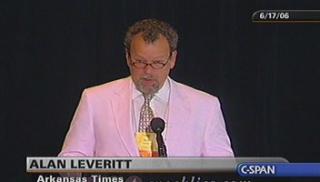 In a disgusting miscarriage of justice, the anti-boycott law was upheld by a lower court in Arkansas on the grounds that a boycott is neither expressive nor speech, which contradicts the precedent of NAACP vs. Claiborne Hardware (1982). The appeal is now before the 8th Circuit Court.

Economic boycotts have been part and parcel of American political striving for liberty from the beginning. I have three words for you: Boston Tea Party. What do you think the American colonists were doing when they tossed 342 chests of British tea into the harbor? They were boycotting, divesting and sanctioning the injustice of King George III.

When Kansas fired Mennonite school teacher Esther Koontz from a program to train other teachers over her refusal to certify that she doesn’t boycott Israel (she does), the ACLU took the case to court and a federal judge struck down the Kansas statute. The state legislature then reformulated it so that it only affected big businesses under certain circumstances, which is also unconstitutional, but made it a little unlikely that the law would affect anyone.

Netanyahu tried to deny a Mennonite school teacher her job.

The anti-boycott laws are unconstitutional. They are also racist, aimed at keeping brown Palestinians down.