When MSNBC legal analyst Mimi Rocah (7/21/19) said that Bernie Sanders “made [her] skin crawl,” though she “can’t even identify for you what exactly it is,” she was just expressing more overtly the anti-Sanders bias that pervades the network.

The hostility is so entrenched, in fact, it seems to have corrupted MSNBC’s mathematical reasoning and created a new system of arithmetic. The cable news network has repeatedly made on-air and online mistakes about Sanders’ polling and other numbers—always to his detriment, and never with any official correction.

Here are some new rules MSNBC seems to follow when it comes to math and Bernie Sanders.

MSNBC made a handy graphic for a poll on July 7 that showed 2020 match-ups against Trump among Democratic voters. The list was in descending order of candidates’ polling numbers—except for Bernie Sanders, whose name is placed under Warren’s and Harris’s, though he polls higher than both of them. (If the list is ordered by the margin between the candidate and Trump, Sanders would be in third place, behind Harris.)

Lest you think this was an isolated incident, MSNBC’s Steve Kornacki placed Sanders’ name below Warren’s on July 15, when he was “reporting” on a poll put out by the Washington Post and NBC (MSNBC’s parent company.) Once again, the order of the names is descending by poll numbers—except for Bernie Sanders’, which is, once again, placed below where it should be. This time, Sanders is placed below Warren, though he polls higher than she does (both in the percentage who say they would vote for each candidate and the spread over Trump). This same order is used in the online story’s headline (7/14/19), which says, “Trump Trails Biden, Warren and Sanders in New NBC News/Wall Stree Journal Poll.”

But it gets worse. It was misleading to have Sanders’ name after Warren’s in the graphic, but an absolute error or lie to say Warren was second, which Kornacki, who was talking about a poll conducted by his own company, did. I had to re-watch the video to make sure I wasn’t missing something, but Kornacki does indeed say (at 1:09): “Elizabeth Warren, she’s been running second place, she is running second place on the Democratic side. She leads Trump by 5 points.” Then Kornacki shows the person who is actually in second place and says, “Bernie Sanders, he leads by 7 points.”

Meet the Press’s Chuck Todd (5/24/19) showed a graphic claiming that Sanders had gone down 5 points in a Quinnipiac poll. Todd got the absolute value right, he just got the value sign wrong: Sanders didn’t go down by 5 in the poll, he went up by 5 — a 10-point difference. 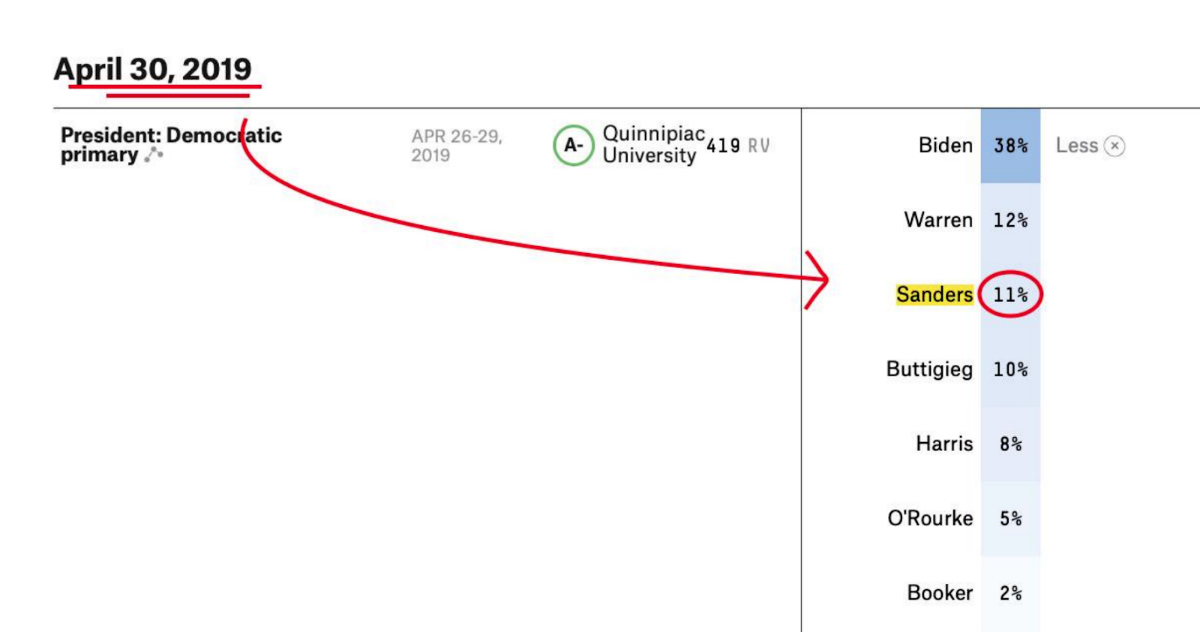 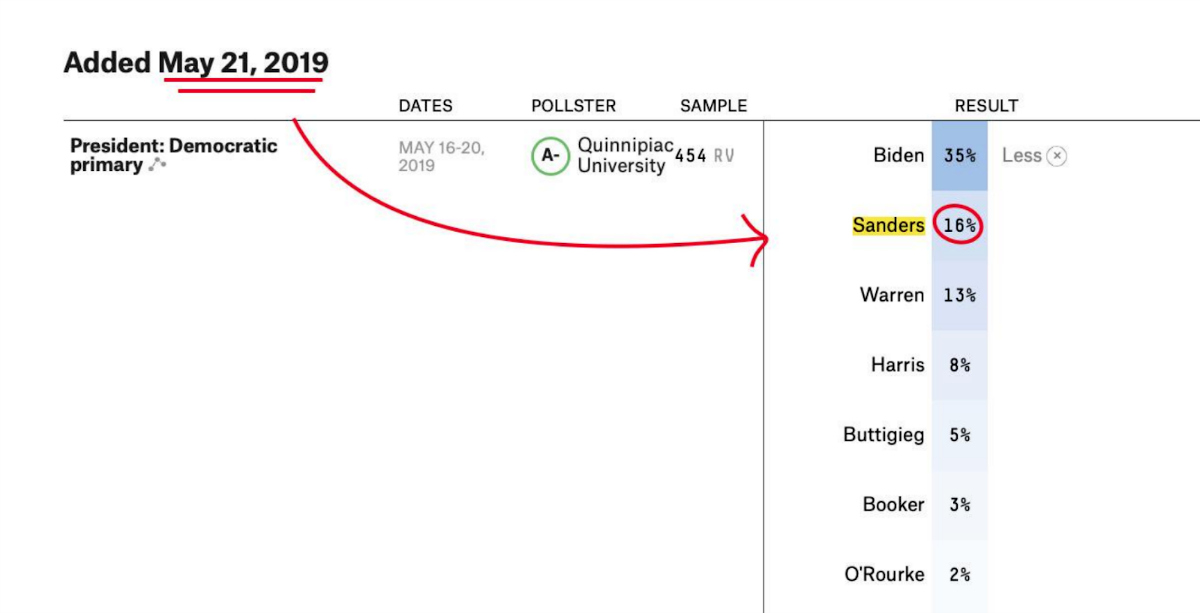 After an April Monmouth poll showed Sanders polling at 27 percent among non-white voters and Biden polling at 25 percent, Velshe and Ruhle (4/29/19) showed a graphic which somehow added three points to Biden’s numbers, putting him in “first” place. 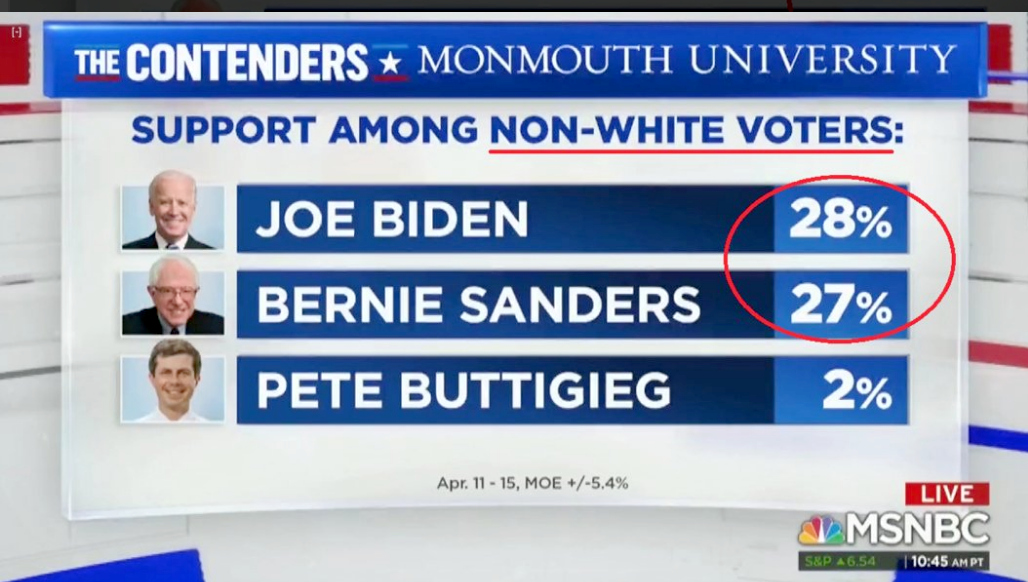 Result: Sanders goes from a candidate with one of the best records with female donors to one of the “worst.”

Rachel Maddow on April 29 did a segment (and tweeted) about a study on the gender of campaign donors. Unfortunately, she forgot to say the study she cited only looked at donors who gave $200 or more. After praising Gillibrand for “doing the best in terms of targeting female donors,” Maddow urged her viewers to

look at the other end of the spectrum! Just strikes me as unsustainable. Bernie Sanders and Pete Buttigieg…. Look at them! Both of them are raising twice as much money from male donors as they are from female donors. 66 and 67 percent of your donations are from dudes? Dude!

The same Open Secrets report Maddow was citing explained that its results were skewed: Since

Sanders has the  highest amount of money coming from small donors…at 74 percent…[and] generally only donations above $200 are itemized…the gender landscape of small donations are absent.

In fact, according to Sanders’ communications director, 46 percent of the 525,000 people who contributed to Sanders’ campaign during the first quarter were women. “It is virtually certain,” she tweeted, “that more women have donated to our campaign than any other.”

Rachel Maddow: You’re a Rhodes scholar, have a nightly news show, earn $7 million a year, and missed or failed to disclose that the study only looked at wealthier dudes and dudettes? Dude!

Result: Sanders goes from highlighting his opposition to racism and sexism  to “not mentioning” them.

In March, MSNBC’s Alex Whit hosted a panel to discuss Bernie Sanders’ March 2 campaign kickoff speech.  Panelist and MSNBC political analyst Zerlina Maxwell said: “I clocked it. He [Bernie Sanders] did not mention race or gender until 23 minutes into the speech.”

As Sanders surrogates, journalists, organizers, activists and people on Twitter pointed out, Sanders most definitely mentioned race and gender  five minutes into his speech, when he said “the underlying principles of our government” will “not be racism, sexism, xenophobia, homophobia and religious bigotry.” Sanders starts his speech 31 seconds after he gets on stage so, to be charitable to his critics, he doesn’t mention gender or race until 5:31.

Maxwell, a former Hillary Clinton staffer, though MSNBC didn’t mention that when they introduced her, did delete a tweet which had said, “OK 23 minutes in Bernie finally mentions race and gender.” But she was far from contrite:

I’ve rewatched since yesterday and while I can acknowledge that I missed the passing line at 6 minutes I stand by my point since talking about criminal justice is not the same thing as talking about race and gender and if you don’t get why Bernie won’t win….again.

Sanders spoke about race and gender outside of the context of criminal justice, which anyone who watched or rewatched the speech would know. But accuracy seems not seem not to be the point so much as it is putting down a candidate who makes your “skin crawl,” for reasons that you can’t quite explain. Citizens, including the ones MSNBC claims to speak for, deserve better.