Mr. Fish’s TED Talk: On Scratching Itches, Ditching Decorum and Reimagining the Role of the Artist You may have seen examples of the TED Talk phenomenon, in which earnest, variously recognized (or self-declared) experts on any number of topics share their wisdom while pacing a slickly lit stage in a headset. Subjects covered in the YouTube-optimized clips have ranged from life-changing realizations that may occur on the edge of life itself to life-changing realizations that may occur during and after a life-threatening stroke. Also among the genre’s greatest hits: orgasms, underwear models, liars and the inevitable Tony Robbins life-coaching session.

Then there’s Mr. Fish. In his recent TEDxPenn talk at the University of Pennsylvania, the cartoonist, author and lecturer gets warmed up with this pressing question for his audience: “How many of you have had an itch while you’re in public that decorum prevents you from scratching?”

Those familiar with the colorful, original and not infrequently ribald work of Mr. Fish, who at times answers to the name Dwayne Booth, might not be too surprised by that setup. But over the course of his presentation, he touches on the changing role of the artist in cultural and political circles, the everyday “lies” we engage in symbolic form, and the value of following ideas that present themselves like persistent itches that are best addressed in public. 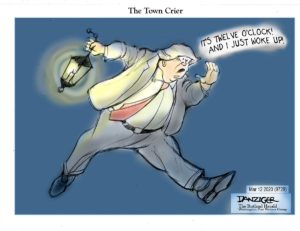