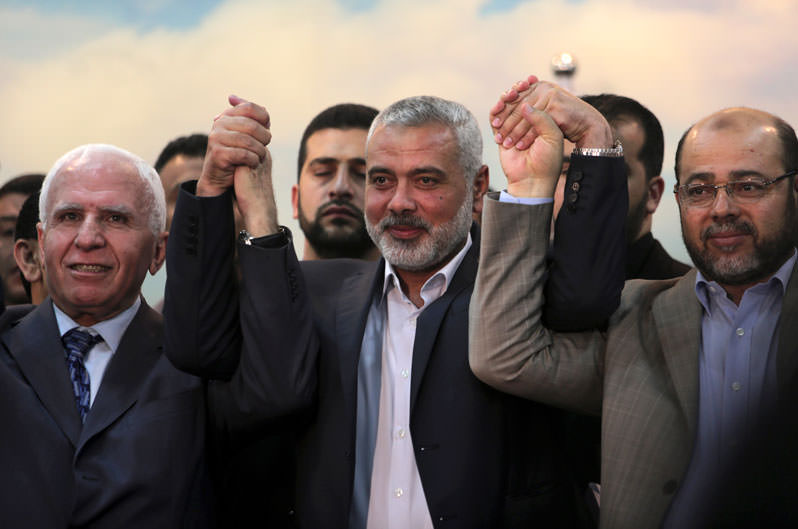 Senior Fatah official Azzam al-Ahmad, left, Gaza's Hamas Prime Minister Ismail Haniyeh, center, and senior Hamas leader Moussa Abu Marzouk, who is based in Egypt, after the announcement of an agreement between the two rival Palestinian groups, Hamas and Fatah, at Haniyeh's residence in the Shati Refugee Camp in the Gaza Strip. AP/Adel Hana

Fatah and Hamas, the two Palestinian factions that have for the last seven years ruled the separate territories of the West Bank and the Gaza Strip, announced Wednesday they will form a unity government.

Israel, along with the U.S. and Europe, considers Hamas a terrorist organization, and Israeli Prime Minister Benjamin Netanyahu said that Fatah leader and Palestinian Authority President Mahmoud Abbas would have to choose between peace with Hamas and peace with Israel. “You can have one but not the other,” he said.

However the abject failure of peace negotiations between Israel and Abbas’ representatives may have spurred momentum toward Palestinian reconciliation. The two organizations — Fatah and Hamas — have been at odds since a 2006 election handed a parliamentary majority to the latter. Following a short battle for control of Gaza, Fatah and Abbas were left with the West Bank and the general backing of the U.S. and Europe, which prefer not to recognize or deal with Hamas.

The New York Times suggests in its reporting that Hamas may be more inclined to reconciliation since the new government in Egypt began cracking down on smuggling routes that bring contraband, but also vital goods, into the territory. A naval blockade by Israel ensures nothing else gets through. Abbas, meanwhile, has overstayed his electoral mandate, and elections are in order.

If Netanyahu is correct, and Abbas must choose between peace with Hamas and peace with Israel, he clearly found an easier negotiating partner in Hamas. The clock runs out on this round of Israeli-Palestinian peace negotiations April 29, and no one expects a deal.