The U.S. and Russia have agreed that Syrian chemical weapons will be put under international control and destroyed beginning one week from now, The Guardian reported Saturday.

U.S. Secretary of State John Kerry said international inspectors from the Organization of the Prevention of Chemical Weapons must be given “immediate and unfettered” access to the chemical weapons cache in Damascus and a “comprehensive list” of its contents.

Russian Foreign Minister Sergey Lavrov was present as Kerry outlined the details of the deal at a news conference in Geneva on Saturday after three days of talks.

Kerry said the removal of chemical weapons would be “credible and verifiable” if fully implemented. “The world will now wait for the Assad regime to honour its commitments,” said Kerry. “There is no room for anything other than full compliance.”

Kerry said Russia and the US had agreed on the amount and type of Syria’s chemical weapon arsenal and committed to assuming control of it and eliminating it in the “soonest and safest” way.

The agreement seems to remove the prospect of any strike against Syria following the chemical attacks in Damascus on 21 August which killed up to 1,300 people. 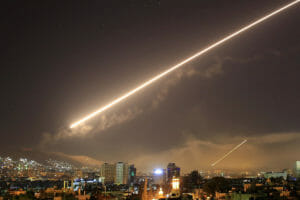