Three years after tech reporter Christopher Calnan was terminated from the Austin Business Journal, he received threats from its parent company for the same reason he was hired and praised for in the first place: his ability to cover breaking news about the powerful Austin-based Dell Technologies Inc.

“They recruited me because they were having a hard time getting any real, breaking news at all,” Calnan said. “Even in the interview, they asked me if I could break anything on the company, because Dell was the big company in Austin.”

Calnan had worked for the American City Business Journals (ACBJ)—a company that runs 43 local business news outlets across the country—for 11 years, and was recruited to the Austin Business Journal (ABJ) after three years of covering technology at ACBJ’s Boston-based Mass High-Tech.

ACBJ is owned by Advance Publications, Inc., perhaps best known as the parent company of Conde Nast, which owns 18 publications, including the New Yorker, Wired and Vogue. Advance is also the majority shareholder of the social media/news aggregator site Reddit. Advance was founded by the Newhouse family, which funds the S.I. Newhouse School of Communications at Syracuse University, one of the most renowned journalism schools in the country.

Calnan’s issues with Advance and Dell began in 2015, when he wrote an article for ABJ about Dell CEO Michael Dell accepting an award from the environmental group Keep America Beautiful. The article pointed out that Dell had paid $75,000 to sponsor tables at the luncheon where he was presented with the award.

Calnan said during his reporting process, he reached out to Dell for comment and received no objections to the story. But after leaving the office on vacation, Calnan returned to find the story removed from ABJ’s site. He was asked to delete the accompanying tweets.

“When I came back into the office, my publisher told me Michael Dell personally called our corporate office, and two weeks after I was called in for a surprise performance review and I was told that my job was in jeopardy,” Calnan said.

Calnan said he believes the performance review served to cover up the true reason behind his ultimate termination: corporate censorship by ABJ for fear of Dell’s wrath.

“It was all handled behind closed doors, and they tried to cover it with the annual review,” Calnan said. “I hadn’t had an annual review in over three years.”

In fact, prior to this incident, Calnan had received glowing reviews from his higher-ups and the business news community. In 2010, he was awarded ACBJ’s Eagle Award for Excellence for 2009, recognized his reporting prowess and work ethic. In a 2012 performance review, he was described as “one of the most professional reporters we know,” whose ethics were “above reproach.”

But In 2016, Calnan said, Dell denied him press access to the company’s annual conference, DellWorld, with a spokesperson even telling his editors that they would allow anyone else from ABJ.

“They wouldn’t give me press credentials to DellWorld, and my editors didn’t even object to that,” Calnan said.

Calnan’s job was terminated that same year, after he wrote an article about Dell planning to move the 2017 conference from Austin to Las Vegas, and highlighted that the move would cost the Texas city millions in annual revenue.

Upon termination, Calnan was offered an $8,500 nondisclosure agreement, which he refused. He moved back to Boston and later published articles on his website, ChristopherCalnan.com, continuing to write about Dell’s censorship tactics and his own experience with them.

“The editor at the Texas Observer didn’t feel it was strong enough,” Sweeney said.

From what I recall, it was that it was too circumstantial.… I stand by the story. Everything I wrote about was documented, or I talked to people. There’s no question on the information. …  Maybe he wanted more of a smoking gun than I gave him, but the theme of the story is this is what happens to a good reporter, this is the way they do it.… The story isn’t that Michael Dell showed up in the office and walked up and pointed at him and said, “Off with his head.” … It’s very subtle. There are phone calls made, there’s a paper trail created…a period of ostracization.

However, since Sweeney’s story, Advance has taken even more steps against Calnan. This past March, Calnan received a letter from Advance’s attorney, threatening legal action on two claims that Calnan and his attorney easily refuted.

The first was an allegation that Calnan was illegally accessing one of ABJ’s Twitter accounts to post his own content. “Please be advised that any future attempt by you to improperly use an ACBJ social media account may result in ACBJ pursuing all available legal remedies against you, including the civil and criminal remedies available under the Computer Fraud and Abuse Act,” the lawyers wrote.

However, the account in question, @ABJTech, was formerly Calnan’s, @abjcanlan. After his termination, the company took over the account and changed the name. The articles that were shared on @ABJTech were posted via bit.ly, because Calnan’s usurped Twitter account and bit.ly accounts were linked.

The second claim was that Calnan was infringing on copyright by creating a website called Business Journal Network with the domain name, austinbizjournal.com, names confusingly similar to that of American City Business Journals. One article he had posted on his own website allegedly appeared on the site, but Calnan said he had never heard of it, and still said he has not visited the page. The site with the domain name austinbizjournal.com no longer exists.

When Calnan and his attorney responded to Advance refuting their claims, they did not receive a reply.

Neither Advance nor ABJ responded to FAIR’s requests for comment.

Steve Gilmore, a member of Dell’s global communications team responded to FAIR via email: “Our only comment on this matter is that any suggestion of Dell involvement in ABJ’s HR matters, at any level, is simply baseless.”

However, as Sweeney said, Michael Dell need not walk into newsrooms and demand reporters be fired to have an effect on personnel matters. Calnan said he had heard his pieces sparked Dell to threaten legal action.

“One of my editors told me that the company threatened them with a lawsuit,”  Calnan said.

But why would a subsidiary of Advance, a multi-billion-dollar conglomerate, fear a libel suit for stories based in fact about a public figure who would need an extremely high burden of proof to win? Calnan said he was never able to find out, but that he knows Dell is a big advertiser for many outlets.

In Austin, Dell has just about as much influence as money can buy. Michael Dell is worth $35 billion, and his philanthropy has placed his name on the Dell Children’s Medical Center, Dell Seton Medical Center, Dell Diamond baseball field, Dell Medical School at the University of Texas, Michael and Susan Dell Hall and more.

So when it comes to unfavorable press, Sweeney said, “He just has the ability, apparently, to call the top executives and put out any kind of brush fire.” 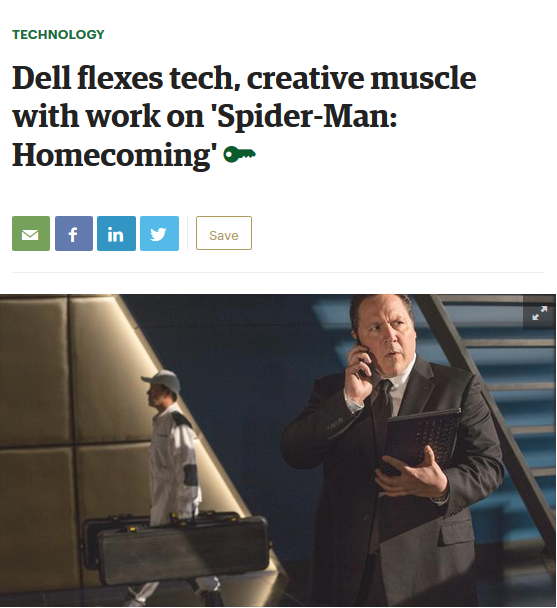 Sweeney also said tech outlets like ABJ often work as mouthpieces for powerful companies, rather than upholding the journalistic ethic of being critical of power.

“Something like these business journals are designed to be the booster press,” Sweeney said.

“It was uncritical,” Sweeney said.

“I want readers to realize that their news is being sanitized,” Calnan said. “It’s being company-approved.” What We Have Here Is a Failure to Compensate Watch Where You Point That Laptop