A Farmer’s Life, in Focus and on Film In director Ramin Bahrani’s latest film, “At Any Price,” he tells the story of Henry Whipple (Dennis Quaid), a man who runs a farming empire in Iowa and sells genetically modified seeds. Whipple wants to pass the farm down to his sons, but the older one is traveling through Argentina and the younger one, Dean (Zac Efron), wants to race cars.

Bahrani, whom the late, sorely missed movie critic Roger Ebert called the “director of the decade” in 2010 for films such as “Man Push Cart,” “Chop Shop” and “Plastic Bag” (a short narrated by Werner Herzog), was drawn to this topic when he started reading Michael Pollan’s best-selling books about food and farming. He asked Pollan to introduce him to some of the farmers featured in his book “The Omnivore’s Dilemma,” including George Naylor, who wound up playing the role of Farmer George in “At Any Price.” Bahrani spent half a year living with farmers in Iowa where he watched them deal with tremendous pressure to expand their multimillion-dollar businesses.

We talked recently with Bahrani about the pressures of farming in the current Monsanto-dominated environment, why he sees his film as a kind of “Death of a Salesman” on the prairie and how the country has changed since Alexis de Tocqueville wrote “Democracy in America” two centuries ago.

Emily Wilson: You say you see similarities between agribusiness and the housing crisis and the global financial meltdown. How so?

Ramin Bahrani: Big industrial farming is based on economy of scale, so the larger you are, the more power you have, meaning the better prices you can negotiate with Monsanto on fees, the better prices you can get on fertilizers like Roundup Ready, the better deals you can get on large machinery like tractors, combines, planters and sprayers which can farm massive acreage quickly and efficiently. All these things work in the same way Walmart works when it shows up on Main Street. How are you going to compete when they can sell everything for so much less? The same thing happens in large banking institutions. When you graduate people out of MIT who have no interest any more in making discoveries and inventing things and solving problems of the world — instead they’re creating financial systems none of us can comprehend. This is yet another way to make massive amounts of money at everyone’s expense. When you make that much money, you also have power. Then you have people running regulatory agencies who are in positions or were in positions of great financial power in that industry. It just doesn’t make any sense.

EW: You spent six months hanging out with farmers. Did these topics ever come up?

RB: Some of them, yes. Some of them it didn’t seem to be a topic of conversation. Every farmer I met was incredibly nice. They were very openhearted, very good people. They invited me to their homes, so I didn’t stay in motels or hotels. The idea of me staying in a hotel seemed foreign to them. They still have that traditional set of values about community and caring about your neighbor, but times have changed and these mantras in the film — “expand or die,” “get big or get out” — all of them without fail told me this when I asked, “What is the one thing that runs your life?” These were the two things I would hear, and that pressure is very difficult to deal with and manage because you get into situations like the Whipple family where you have to survive as a family and family comes first. When I met Zac, he said, “That’s how I grew up, family comes first.” That means you get into cutthroat activities with your neighbors because you have to survive. These are the pressures we’re all feeling. Right now I’m sure there’s going to be some journalist who writes for The Associated Press, and they are going to write one review of my film and it’s going to go to 200 newspapers. That means journalists out of a job.

EW: Like in the movie, did you find people were worried about their kids getting into farming?

RB: Oh, of course. Without fail. Usually the farmers I met would say, “I would love my kid to do anything they want, and they’re going to farm.” Or I would say, “What’s your kid interested in now, and they would say, “Oh, he loves farming,” and the kid would be like, 6. And that’s OK — it makes sense. If I were a farmer, I would feel the exact same way. It’s not the same as my profession or your profession. What am I going to pass down if I had children? The concept of a movie I want to make? With a farm, you actually can give them land. It’s even more tangible than a brick and mortar business. The real challenge is like for Zac’s character, the larger the farms get, the families go away. Those families have been bought out and they’ve moved. So that means the local Main Street is going to get emptied out because there’s not enough people to support those small mom and pop stores. So usually the farmers drive 20 or 30 minutes to Walmart or Costco, so for characters like Zac’s, there’s nobody around and there’s nothing to do, so you just kind of bide your time and get into trouble. EW: How did you get interested in this topic? It seems different than your other movies.

RB: It’s different because the characters aren’t immigrants this time, and they’re not financially unstable. The characters in this film have money. And it was the first time I decided to have a character who is not so positive. Alejandro [Polanco] in “Chop Shop” did some things that were questionable, but had a good heart. Here Dennis is quite unlikable for some time. Only in the course of the film does he start to become self-aware and we start to empathize with him because we realize he’s kind of trapped by himself, by his dad, by the system and it’s made him this way.

I became interested in this subject because of a friend of mine, Jenni Jenkins. We did “Plastic Bag” together. She was involved in sustainability, and she got me interested in food. I wanted to change my eating habits, and I started reading Michael Pollan. Then Michael Pollan and I became email friends. He liked “Plastic Bag,” and I was a huge admirer of his work. I asked him to introduce me to George Naylor, who’s a prominent figure in “Omnivore’s Dilemma.” Then I went and lived with George in Iowa on and off for six months. Through Michael, I also met Troy Roush, a prominent figure in [the film] “Food, Inc.” When I went out to the farms, I noticed how modern it was. These are not yokels in overalls — most are very smart, very sophisticated businessmen. In fact most of them told me, “Make whatever film you want, just stop portraying us as yokels.” Most of them step out in the backyard, and it’s a multimillion-dollar business — in the backyard! And there’s so much pressure and so many variables. Not just the commodities market, but should there be some political instability in China that might affect the price of grain in China, they would have to make on the spot decisions about buying and selling crops.

I was startled by all these things, and it was so unlike what I had seen portrayed in films. Like my other films, I wanted to portray things we think we know, but portray them more honestly and fresher like “Man Push Cart” and “Chop Shop,” which show New York in ways we don’t see in movies, but New Yorkers said, “Oh, that’s the New York I actually live in.”

EW: What was the most surprising thing that you learned about farming? Was it the sophistication?

RB: The modernity of it was startling. I was with George Naylor, and he said, “I’ve got to go into town.” He wanted to go into Jefferson, the county seat, and he said, “There’s going to be a PowerPoint presentation about micronutrients. You’re going to find it really boring, so I’ll meet you in a couple of hours.” I said, “Are you crazy? Of course I want to go to this meeting.” You go to the back room of a diner with these faux wood accordion doors just like in the film, and there were farmers listening to a presentation by some guy with a Ph.D., and I thought to myself, “This was what doctors did with pharmaceutical companies — get steak meals and be convinced they should be giving Viagra to their patients or whatever.” I never knew it happened with farmers.

There were always things like this — like the idea of a seed salesman. I had never heard about such an occupation. I immediately thought of Willy Loman in “Death of a Salesman.” I met an amazing seed salesman, a genetically modified seed salesman and a farmer. As soon as I left my first visit with him, I saw Willy Loman everywhere. I saw Willy Loman saying, “Expand or die.” The thing about Willy Loman in Arthur Miller’s masterpiece is that character at the end of the play, he feels compelled to kill himself to be a success, and that’s a warning. When I was writing this, it was 2009, 2010, the whole world was in complete financial meltdown, and I saw Willy Loman then too.

It’s just not your typical farm film. It’s like Wall Street in the cornfields, minus the skyscrapers. I really think these are good people. Somehow it breaks my heart, not just for farmers, but for the whole country, that there’s this system that makes no sense. It’s only for the very, very wealthy. It’s just no way to live. If you look at when de Tocqueville came to America, he was praising what he saw, which was pragmatism. What’s good for me, should be good for you — it just should be a little bit better for me. That works. Now it’s what’s good for me should be bad for you. That doesn’t really work. That’s going to rot out the whole system. That’s not going to work, and it’s not what made the country so great. 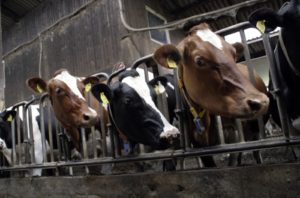 Silicon Valley’s Farm Bot Is as Dystopian as It Sounds