Where Women Can Have It All While Mitt Romney tries to make us believe socialism is evil, working mothers in France are evidence to the contrary; several stories about employers insisting their employees vote for Romney have come to light; meanwhile, activists in Guatemala are peacefully protesting mining in San José del Golfo in spite of violence against them. These discoveries and more below.

Trapped by European-style Socialism—And I Love It! Maybe working moms can have it all—in France.

Property Is theft Apparently, the official story about the origins of Monopoly is wrong.

Election 2012: They Will Steal It! Back in 2000, Republican election officials in Florida led by then-Gov. Jeb Bush and Secretary of State Katherine Harris kicked nearly 60,000 mostly African-American voters off the rolls just before the election.

What Took Biden so Long on Trans Discrimination? Vice President Joe Biden called transgender discrimination “the civil rights issue of our time” to a woman outside a campaign office in Sarasota, Fla.

Choose Your Capitalism What’s amazing is that, given the spectacular failure of the U.S. form of capitalism, the polls are indicating a very close election.

Freedom of Speech Suspended ‘Until Further Notice’ An arrest warrant was issued recently by a Greek prosecutor for Kostas Vaxevanis, a Greek investigative journalist.

Baby-Name Regret Is on the Rise Expectant parents, back away from the baby-name books.

Can the Company Fire you for the way you Vote? Very likely, yes. When it comes to employees’ political views, the free market, not free speech, is the power that rules America.

After E-literature, There’s no Going Back Reading scholar Jessica Pressman explains why electronic devices have forever changed how — and what — we read.

Guatemala: Peaceful Resistance in the Face of Violence Telma Yolanda Oquelí Veliz, who was nearly killed for her activism against mining in San José del Golfo, Guatemala, spoke out publicly for the first time since the attack against her in June. 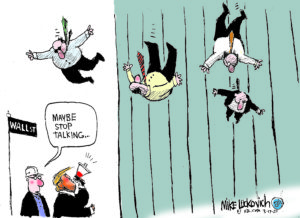