Truthdigger of the Week: George McGovern Certain people throughout history are destined, at least in the short term, to become synonymous with lost causes. This strengthens, rather than diminishes, the principles by which they lived.

A presidential election can be thought of as a referendum on national values. When Sen. George McGovern suffered a landslide defeat to President Richard Nixon in the 1972 presidential election, it signaled a nationwide rejection of liberalism. It is difficult to blame the American public of the early ’70s. Democratic presidents, then in place for a decade, effectively started the Vietnam War, a disastrous decision that helped end nearly 30 years of confidence in elected leaders that had built up since the social welfare programs of the New Deal. Now, the public had little reason to trust its elected leaders. Predictably, voters threw out the incumbent party in 1968 and elected a Republican.

Full knowledge of the Watergate break-in, in which Nixon paid men to collect information from the Democratic National Committee headquarters, was less than a year away when he was re-elected in 1972. Americans had no reason to believe the man was an outright crook. But he turned out to be. And the scandal that resulted, combined with President Ford’s pardon of Nixon after he resigned, diminished the public’s trust in government even further and made cynicism a greater part of the national fabric.

It might not have been necessary. During the campaign he eventually lost, McGovern, a decorated World War II pilot, called for the end of the Vietnam War, amnesty for draft evaders and a 37 percent reduction in spending on the military-industrial complex President Eisenhower warned about when he left office in 1961. During a Senate speech in 1963 that marked him as the first member to challenge the U.S. military’s growing involvement in Vietnam, McGovern said:

“The current dilemma in Vietnam is a clear demonstration of the limitations of military power … [Current U.S. involvement] is a policy of moral debacle and political defeat. … The trap we have fallen into there will haunt us in every corner of this revolutionary world if we do not properly appraise its lessons.”

McGovern was not immune to political pressure, however. As a senator he voted in favor of the Gulf of Tonkin Resolution, which gave President Lyndon B. Johnson authority to escalate U.S. involvement in Vietnam. McGovern later explained that his first instinct was to vote no, but that he became convinced it was important to support Johnson politically. He went on to express remorse for the decision. After spending three weeks in Vietnam in 1965, McGovern decided “not merely to dissent, but to crusade” against the war.

He attempted to end the conflict through legislation, criticizing his colleagues who refused to do so during a speech that included the following admirable denunciation:

“Every senator in this chamber is partly responsible for sending 50,000 young Americans to an early grave. This chamber reeks of blood. Every senator here is partly responsible for that human wreckage at Walter Reed and Bethesda Naval and all across our land — young men without legs, or arms, or genitals, or faces or hopes. There are not very many of these blasted and broken boys who think this war is a glorious adventure. Do not talk to them about bugging out, or national honor or courage. It does not take any courage at all for a congressman, or a senator, or a president to wrap himself in the flag and say we are staying in Vietnam, because it is not our blood that is being shed. But we are responsible for those young men and their lives and their hopes. And if we do not end this damnable war those young men will some day curse us for our pitiful willingness to let the executive carry the burden that the Constitution places on us.”

McGovern’s amendment failed, but statements like that made him into a hero among progressives. They did not, however, endear him to his colleagues. Believing now that only a president could bring the war to an end, McGovern pointed his crusade toward the White House. He lost. The war lasted more than four additional years, and took thousands more American and Vietnamese lives.

Earlier this week, McGovern’s family reported that the 90-year-old had been admitted to hospice care and subsequently became unresponsive. He is not expected to live long. McGovern’s impending death gives us the occasion to consider the direction America might have taken if the 1972 referendum on values had not selected a leader in favor of war and money but instead had put into power a man who exhibited empathy. As was said in the 2005 documentary “One Bright Shining Moment: The Forgotten Summer of George McGovern”:

With that earnest endorsement, we honor George McGovern in his final days as our Truthdigger of the Week. Do You Prefer Your American Empire Coarse or Polite? 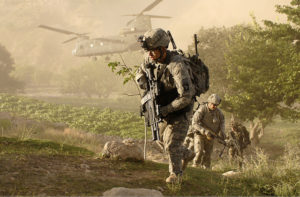