The Gilded Age vs. the 21st Century 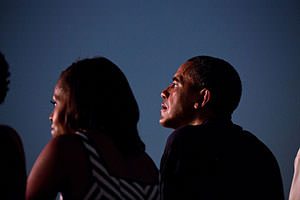 The 2012 campaign began on Aug. 2, 2011, when President Obama signed the deal ending the debt-ceiling fiasco. At that moment, the president relinquished his last illusions that the current, radical version of the Republican Party could be dealt with as a governing partner. From then on, Obama was determined to fight — and to win.

It was the right choice, the only alternative to capitulation. A Republican majority both inspired and intimidated by the tea party was demanding that Obama renounce every principle dear to him about the role of government in 21st-century America. And so he set out to defeat those who threatened to bring back the economic policies of the 1890s.

Now, it’s up to the voters.

Obama took the oath of office before a vast and euphoric crowd, but as he raised his hand, he was inheriting an economy worsening by the day. And he was about to confront a Republican Party that took its setback as an imperative to radicalize.

In the wake of the failures of George W. Bush’s presidency, Republicans would ascribe their party’s problems to Bush as a big-spender, ignoring the major culprits in the country’s fiscal troubles: a downturn that began on their watch, and their own support for two tax cuts at a time of two wars. They would block, obstruct, stall and denounce all of Obama’s initiatives, and abuse the rules of the Senate to demand that every bill would need 60 votes.

And then came the tea party. It was, all at once, a rebirth of the old far right from John Birch Society days, a partisan movement seeded by right-wing billionaires, and a cry of anguish from older, middle-class Americans fearful over the speed of social change. The GOP establishment rode the tea party tiger to power in 2010, and then ended up inside. Republicans who dared to deal or compromise risked humiliation in primaries at the hands of a far right certain that the president of the United States was a subversive figure.

Nonetheless, Obama kept trying to work with them. His plans and proposals were geared not toward his progressive base but toward moderates in both parties: no public option in the health care law, plenty of tax cuts in a stimulus whose size was held down, a very temperate reform of a dysfunctional financial system.

Obama’s aides are unanimous in saying that the breaking point came when Republicans, filled with tea party zeal, were willing to endanger the nation’s financial standing to achieve steep budget cuts during the debt-ceiling fight. When House Speaker John Boehner walked away from a deal that conservatives of another era would have hailed as a great victory, Obama realized a grand bargain would be a chimera until he could win the battle about first principles.

Everything you needed to know about Obama’s argument was laid out on Dec. 6, 2011, at a high school in Osawatomie, Kan., the place where Theodore Roosevelt had laid out the core themes of American progressivism a century earlier.

“Just as there was in Teddy Roosevelt’s time,” Obama declared, “there is a certain crowd in Washington who, for the last few decades, have said, let’s respond to this economic challenge with the same old tune. ‘The market will take care of everything,’ they tell us. If we just cut more regulations and cut more taxes — especially for the wealthy — our economy will grow stronger. … And, they argue, even if prosperity doesn’t trickle down, well, that’s the price of liberty. Now, it’s a simple theory. … But here’s the problem: It doesn’t work. It has never worked.”

In Mitt Romney, Obama was blessed with an opponent who embraced that theory, not only in his move far to the right to secure the Republican nomination but also in his own career as a private equity capitalist. Romney may have flipped and flopped and flipped again on issues he didn’t care about, but his view of American capitalism and American government never wavered. If Teddy Roosevelt fought against the policies of the Gilded Age, Obama is fighting a Republican Party determined to bring the Gilded Age back and undo the achievements of a century.

And so, beneath the attacks, the counterattacks, and the billions invested by small numbers of the very rich to sway the undecided, we face a choice on Tuesday that is worthy of a great democracy. My hunch is that the country will not go backward, because that’s not what Americans do.