Secretary of State Mike Pompeo announced Monday that the US no longer considers Israeli squatter settlements on Palestinian land to be illegal.

A combination of US Evangelical lawlessness and white supremacy with incessant lobbying by the Zionist far right has finally put the United States in the position of supporting the policies of the Axis in World War II.

That is the historical meaning of Pompeo’s position.

In 1940, Italy’s Mussolini (the idol of Steve Bannon, Trump’s former White House chief strategist) grabbed Nice from France. Mussolini intended to permanently annex this territory, and had designs on the port city of Marseilles, as well.

Do you think that is right, that Mussolini could just march into France and gobble up part of it? What kind of world would it be if Mussolinis were constantly stealing other people’s territory?

When Mussolini was defeated (and shot to death by a leftist partisan in 1945), the non-Fascist countries created the United Nations and enacted the Geneva Conventions to try to stop Mussolini-like behavior in the future.

The United Nations Charter forbids any country to acquire the territory of others by military force. It is illegal for Italy to march into France and just take Nice for itself.

Mussolini’s imperialism did not stop at the shores of the Mediterranean. In 1911 Italy had launched a war of aggression on Libya and made it a colony. But it wasn’t enough to rule the lives of Libyans with a fascist iron fist and to steal their resources. Beginning in 1938 and continuing into WW II, Mussolini began sending Italians in to Occupied Libya.

Plans envisioned an Italian colony of 500,000 settlers by the 1960s: so, the Italians would be 2/3 of the population in coastal Libya by then. Libya’s best land was allocated to the settlers to be brought under productive cultivation, primarily in olive groves.”

After World War II, not only was aggressively annexing your neighbor’s land made illegal but so too was flooding your own population into an Occupied territory to deprive locals of the fruits of their own resources and grab them for the metropole.

The Fourth Geneva Convention of 1949 governs the treatment of populations in Occupied territories during wartime, and it forbids transplanting people from the Occupying Power’s population into the subjected region. Remember, the United Nations Charter envisages that at the cessation of hostilities, the Occupier would have to give back the territory. It cannot be annexed.

The Fourth Geneva Convention of 1949 on the treatment of populations in occupied territories contains these prohibitions:

Israel is in extensive violation of all of these provisions.

Article 49, Fourth Geneva Convention, says, “The Occupying Power shall not deport or transfer parts of its own civilian population in the territory it occupies.”

So here’s the thing. There isn’t any difference in this regard between the Israeli government and Mussolini. Just as Mussolini invaded and annexed Nice and Corsica, the Israelis invaded Gaza and the West Bank in 1967, at a time when the civilian Palestinian population was not militarized and not directly involved in the Egyptian-Jordanian-Syrian war with Israel. Israel has annexed large tracts of the Palestinian West Bank.

And it has flooded some 600,000 squatters into Palestine (not to mention all the squatters around Jerusalem on annexed territory), just as Mussolini sent all those Italians into Libya. This is just naked aggression and colonialism.

Israelis like to take the 1947 UN General Assembly partition plan for British Mandate Palestine as their charter of legitimacy, even though the UNGA does not have any legal authority to decide such things. But even so, that plan did not award the West Bank and Gaza to Israel, and that denial was implicit in the 1949 Armistice among the belligerents.

Given that the whole creation of the international-law category of war crimes with the Geneva Conventions was in part intended to ensure that never again could the Jewish people be subject to genocide, it is a supreme and ugly irony that no one has done more to undermine and destroy international law concerning occupied populations than the State of Israel.

So what Pompeo said is that the French who lost their lives fighting Mussolini’s invasion were on the wrong side of history, and that the United States now ex post facto regrets George W. Patton’s assault on Italy and US backing for Libyan independence.

The official policy of the United States is now that it is all right to annex neighbors’ land and to settle it with your own squatters.

Pompeo has become Mussolini, in the same way that Israeli prime minister Binyamin Netanyahu long since had.

Ezra Pound began his Pisan Canto LXXIV lamenting the death of “Ben” Mussolini, hung by his heels. The US military wanted to execute him for his active support of Italian Fascism. In turn, it was the aggressive militarism and severe human rights abuses of the fascist Italian state that provoked that animus.

I know what Gen. Patton and Gen. Omar Bradley and Gen. Ike Eisenhower thought of Mussolini. I know what they would think of Pompeo running up the white flag of surrender to Fascist policy.

We have met the Fascists and they are us. 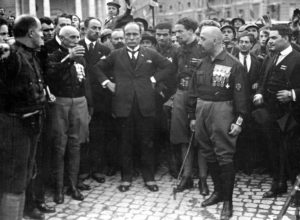 America Is Staring Autocracy in the Face