Save a Life, Get in Trouble 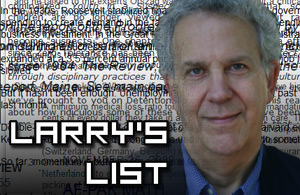 Thanks to the array of legal and ethical factors involved in giving CPR, some people are refusing to administer it; online weddings are becoming quite popular in some immigrant communities; meanwhile, WhiteHouse.gov petitions may actually prove to be effective. These discoveries and more below.

Management Tips for the Catholic Church The Roman Catholic church is the world’s oldest multinational.

Why Are Democrats So Defeatist? The Republicans are openly introspective about why they failed to regain the presidency and the Senate.

Federal Overhaul of Rules for Human Research Hits Impasse After nearly two years of effort, a bid to rewrite the federal rules governing research involving human subjects appears to be stuck, with little optimism for a way forward.

The Real Digital Change Agent Over the past few years, many of the most prominent American universities, including Harvard, MIT, Stanford, and Duke, have joined to embrace a game-changing approach in opening up their previously closed academic resources.

Thomas Friedman is Wrong About MOOCS There’s a legendary story about Anne Sexton’s learning how to write a sonnet by watching I.A. Richard’s educational-television series in the late fifties.

Polyglots Required If We Want a Place In the Global Academy English cannot be the only acceptable language of scholarship, says Toby Miller. It’s arrogant, impractical and anti-intellectual

Does ‘Big Data’ Mean the Demise of the Expert — And Intuition? The audience can’t help cringing, not simply because the scene exposes the way decisions are made devoid of data, but because we’ve all been in situations where “certainty” was based on sentiment rather than science.

Maybe WhiteHouse.gov Petitions Aren’t Useless After All At first the concept seemed thrilling: Get enough people on the Internet to sign on to a petition—any petition—and the White House would respond.

Can You Get In Trouble for Performing CPR? Why do so many bystanders refuse to help someone having a heart attack?

Internet Marriages on Rise in Some Immigrant Communities With a red embroidered veil draped over her dark hair, Punam Chowdhury held her breath last month as her fiancé said the words that would make them husband and wife.

What Fidel Taught Hugo Hugo Chávez died in Venezuela at the age of 58, but his battle with a never-specified form of cancer was waged largely in a Cuban hospital—a telling detail, as Cuba loomed just as large in his political imagination as his native country.

The Actual Politics of Professors With the sequestration crisis at hand, and cuts in defense, education, social programs, and other essential government services in the works, the chatter in some corners of the blogosphere last week turned to … the politics of professors.