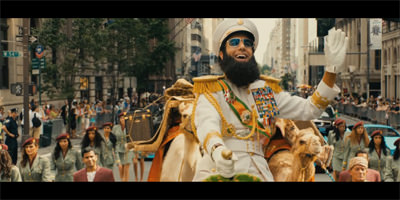 This year, Sacha Baron Cohen can thank the Academy Awards for giving his latest politically flavored comedy, “The Dictator,” some excellent free publicity. Not that he didn’t engineer it himself.

On Wednesday, Deadline Hollywood doyenne Nikki Finke reported that Baron Cohen had been “banned” from Sunday’s Oscar ceremony, even though he’s one of the stars of Martin Scorsese’s highly acclaimed “Hugo,” because the British prankster wanted to show up in full “Dictator” regalia. Engaging in this kind of sartorial spoof, evidently, would fly in the face of austere academy regulations — in other words, that’s just not done.

Except, as Finke pointed out in her column, it kind of is. Now the Oscar planners risk coming off like stuffy fuddy-duddies, and Baron Cohen could enjoy a big PR boost for his new movie simply by not showing up. Or, if the academy backs down, he gets to plug his project in character. Either way, he wins. –KA

The Dictator is a spoof about the “heroic story of a Middle Eastern dictator who risks his life to ensure that democracy never comes to the country he so lovingly oppressed”. Whether the fact that the 84th Academy Awards will be beamed into 200 countries had anything to do with this ban is unclear. But it is highly unusual for the Academy to pull a member’s tickets. An Oscars spokesperson acknowledged to Deadline yesterday: ”We would hope that every studio knows that this is a bad idea. The Red Carpet is not about stunting.” Oh really? Then why did Trey Parker and Matt Stone of South Park crossdress down the Red Carpet as J-Lo and Gwyneth Paltrow in evening gowns in 2000? Or Ben Stiller appear as an Oscar presenter in full blue Avatar makeup and hair in 2010?