Polarization Is Distorting the Syria Debate 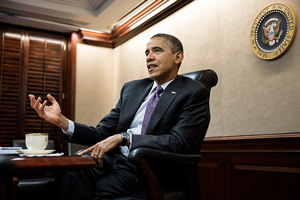 It was only a matter of time before our polarized politics threatened to destroy a president’s authority and call into question our country’s ability to act in the world. Will Congress let that happen?

To raise this is not to denigrate those, left and right, who deeply believe that the United States should temper its international military role. Nor is it to claim that President Obama’s proposed strikes on Syria in response to Bashar al-Assad’s use of chemical weapons constitute some sort of “slam dunk” policy that should win automatic assent. But a bitter past hangs over this debate and could overwhelm a discussion of what’s actually at stake.

The wretched experience of Iraq is leading many Democrats to see Obama’s intervention in Syria as little different from what came before. Never mind that the evidence of Assad’s use of chemical weapons against his own people is far clearer than the evidence was about weapons of mass destruction in Iraq, or that Obama has been so reluctant to take military action up to now. It’s a paradox: While hawks criticize Obama for not being willing to act boldly enough against Assad, doves criticize him for being too willing to risk a wider war. Members of Obama’s party have to understand the risks of forcing him to walk away from a red line that he drew for good reason.

At the same time, Democrats will never forget how their patriotism and fortitude were questioned when they challenged President Bush on Iraq and other post-9/11 policies. Yes, Bush did sign a fundraising letter before the 2006 midterm election that spoke of Democrats “who will wave the white flag of surrender in the global war on terror and deny the tools needed to achieve victory.” At a campaign event that year, he said of Democrats: “It sounds like they think the best way to protect the American people is to wait until we’re attacked again.”

I bring this up only to remind Republicans opposing Obama on Syria — and I’m not talking about the consistent anti-interventionist libertarians — that some in their party are making arguments now that they condemned Democrats for making not very long ago. Can we ever break this cycle of recrimination?

Obama bears responsibility here, too. Precisely because he had been so unwilling to intervene in Syria, he has handed opponents of his policy some of the very arguments they are using against him. Until Obama decided that the chemical attacks required a strong response, he was wary of getting involved because the United States has reason to fear victory by either side in Syria. His old view may have been reasonable, but it can easily be invoked to undercut his current one.

The question now is whether Congress really wants to incapacitate the president for three long years. My hunch is that it won’t. This is why Republicans such as John Boehner, Eric Cantor and John McCain and Democrats such as Nancy Pelosi, Chris Van Hollen and Gerry Connolly all find themselves battling to give Obama authority to act. The inconsistency of some Republicans shouldn’t blind us to the fact that others in the GOP are taking courageous risks to avoid paralyzing the president.

They will not prevail, however, unless Obama makes an unabashedly moral case on Tuesday explaining why things are different than they were a few months ago while laying out a practical strategy beyond the strikes. He must do something very difficult: to show that his approach could succeed, over time, in replacing Assad with a new government without enmeshing the United States in a land conflict involving troops on the ground.

The administration’s view is that only a negotiated settlement will produce anything like a decent and stable outcome in Syria — and that only forceful American action now will put the United States in a position to get the parties to the table. It’s not tidy or an easy sell, but it’s a plausible path consistent with what the U.S. can and can’t do.

If Obama wins this fight, as he must, he should then set about restoring some consensus about America’s world role. He has to show how a priority on “nation-building at home” can be squared with our international responsibilities. The seriousness of this crisis should also push Republicans away from reflexive anti-Obamaism, Rush Limbaugh-style talk show madness, extreme anti-government rhetoric and threats to shut Washington down.

If we want to avoid becoming a second-class nation, we have to stop behaving like one.