Over 1,000 Protest in Ferguson, Call for Highway Shutdown Monday Well over 1,000 people protested peacefully, marching through Ferguson, going to the police station and some going door-to-door in prosecutor McCulloch’s neighborhood asking him to be removed or recuse himself. There are calls for shutting down highways on Labor Day and, if Officer Wilson is not fired and arrested, for shutting down highways for two days the week after.

Hundreds of people gather around the memorial to Michael Brown in the Canfield Green apartments for prayer in Ferguson on Saturday, Aug. 30, 2014. Photo by Robert Cohen.

Despite pouring rain and blistering heat on Saturday a massive, well-organized and peaceful rally and march was held in Ferguson. The St. Louis Post Dispatch reported “The march was billed as a protest ‘against police killings, brutality, profiling and legal cover-ups.’” There is a specific call for action on Labor Day. The New York Times reports:

Organizers at the rally called on demonstrators to drive on Interstate 70 and other area highways at 4:30 p.m. Monday, turn their hazard lights on and stop their vehicles for four and a half minutes to symbolize the four and a half hours that Mr. Brown’s body lay in the street.

“We’re going to tie it down, lock it down,” Anthony Shahid, one of the lead organizers of the rally, told supporters from the stage at a park. The following week, if the coalition’s demands were not met, including that Officer Wilson be fired and arrested on charges of murder, another four-minute traffic shutdown would occur on two days instead of just one, he said.

“I want the highways shut down,” he said of the Monday protest. “I know it’s a holiday, but it won’t be no good holiday.”

Michael Brown’s uncle, Leslie McSpadden (similar name to Brown’s mother) gets emotional during a rally for justice on Saturday, Aug. 30, 2014, in Ferguson. Photo by Huy Mach.

As during the Occupy and other movements, the nation witnessed protesters who are led in a creative, non-hierarchical fashion. The Times wrote: “The march on Saturday showed how difficult it may be to direct the actions of a young, decentralized and assertive protest movement. ” They noted that the march to the police station yesterday involved people breaking off from the crowd to go the station rather than a rally in a park with some chanting “Ain’t no justice in the park!”

Michael Brown, Sr. arrives at a march with his daughter on West Florissant Avenue in Ferguson on Saturday, Aug. 30, 2014. Thousands marched in protest of the Ferguson police shooting of his son, Michael Brown. Photo by Robert Cohen.

A massive tent and a stage on loan from the St. Louis County Parks Department had been set up in the park. The St. Louis Post Dispatch reports Michael Brown, Sr. “repeated his view that Gov. Jay Nixon should remove St. Louis County Prosecuting Attorney Robert McCulloch from the case and appoint a special prosecutor. ‘If we don’t get that done, I don’t want it to get bad,’ Brown said. ‘And it’s already bad.’”

A line of police officers and state troopers guard the entrance to the Ferguson police station on Saturday, Aug. 30, 2014, as protesters held a rally against the police shooting of Michael Brown. Photo by Robert Cohen.

Morgan Bradley (left) asks school girls what they plan to be when they grow up as protesters demonstrated against the police shooting of Michael Brown at the Ferguson police station on Saturday, Aug. 30, 2014. Photo by Robert Cohen.

Ferguson Police Capt. D. McBride ordered protesters back to the sidewalk at a demonstration in front of the police station on Saturday, Aug. 30, 2014. Protesters ignored his order, instead moving further up the driveway, as they continued a rally against the police shooting of Michael Brown. Photo by Robert Cohen.

There was no fear among many protesters about a confrontation with the police, one protester telling the Times: “There is no fear anymore,” she said. “It’s either stand up or die.” They marched for two miles to the police station with their ‘leaders’ who did not arrive at the station until there was already more than 100 people there confronting the police. Protesters demanded the arrest of Officer Wilson, removal of Prosecutor McCulloch and an end to racial profiling.

Protesters yell at Missouri Highway Patrol Capt. Ronald S. Johnson (right) as he hears their concerns at the entrance to the Ferguson police station on Saturday, Aug. 30, 2014. Demonstrations continue against the police shooting of Michael Brown. Photo by Robert Cohen.

Officer Ron Johnson of the Missouri Highway Patrol was there and was also criticized by some of the protesters who yelled to him – your son looks like us and told him he was not really in charge.

Huffingon reports: “Johnson raised his phone at one point and appeared to take a photo of the man. Later, as the crowd continued to disperse, a few officers grabbed the man and took him into custody, quickly walking him behind the line of police officers and, presumably, into a Ferguson jail cell. Neither Johnson and nor any other officers would say why the man was being arrested.” 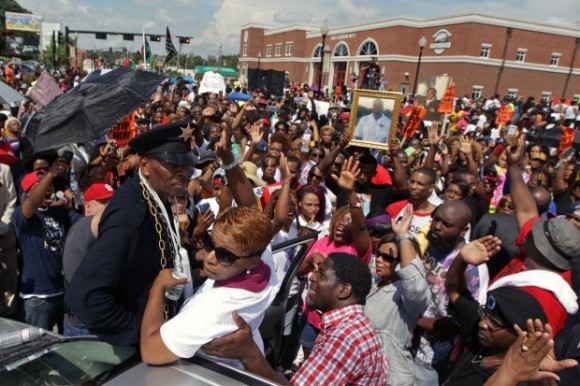 Michael Brown’s mother, Lesley McSpadden (bottom, in white shirt) acknowledges the crowd of protesters gathered in front of the police department on Saturday, Aug. 30, 2014, in Ferguson. Photo by Huy Mach

The Huffington Post reports how the protests are changing the nation:

The death of Michael Brown and the aggressive police response to the demonstrations that followed have sparked a national conversation about race and law enforcement. Now that much of the national media has moved on – a point that was repeatedly made by speaker after speaker at a rally in a nearby park on Saturday — activists are working on channeling the anger exposed in the wake of Brown’s death into concrete changes to policing tactics in the St. Louis region.

Michael Brown’s mother and father participated in the days events. His  mother, Lesley McSpadden, wore a T-shirt bearing an image of her son that read, “A Bond Never Broken.”  And his father wore a shirt that said Justice with an image of Michael Brown, Jr. on it. Huffington Post reports there were “booths where protesters could register to vote and petitions calling for the indictment of Darren Wilson, the Ferguson police officer who shot Brown dead on Aug. 9.”

Huffington Post reports that the “police officers kept a light touch as the demonstrators blocked streets, wearing only normal uniforms and driving regular police cars. Heavily-armored, military-style vehicles were nowhere to be seen, nor were officers in riot gear or canisters of tear gas.” Further, “Nearly all of the Ferguson officers were wearing small, clip-on body cameras, donated by two companies in the wake of Brown’s death. Some, but not all, of the officers were wearing name plates.” Although the NY Times concludes its story with “Shortly after 5 p.m., one of the marchers who had been taunting the police line was surrounded by law enforcement officers and was apparently placed under arrest. It was unclear why.”

Protesters gather in Ferguson on Saturday, Aug. 30, 2014, for a march demanding justice in the Michael Brown shooting case. Photo by Huy Mach.

Some protesters broke off from the march to focus on the removal of Prosecutor Robert McCulloch from the investigation into the death of Michael Brown, Jr. The St. Louis Post Dispatch reports:

. . .40 people from the groups Black Lives Matter and Hands Up United went to the Kirkwood neighborhood where McCulloch lives to hand out fliers seeking his removal from the Brown case.

First they practiced their delivery on each other at a park before heading to knock on doors.

Some residents were receptive to the canvassers and engaged in conversation about the case. The canvassers knocked on the door of the home that neighbors confirmed was McCulloch’s, but no one answered and it was unclear whether anyone was home.

A leaflet accused McCulloch of having a conflict of interest and a “history of favoring police in incidents involving the killing of African-Americans.”

They handed out fliers that called on Governor Nixon replace McCulloch with a special prosecutor.

For a series of Vine videos taken during the protest. What Would Justice for Sandra Bland Actually Look Like?