Obama Cashes In at Hollywood Fundraiser 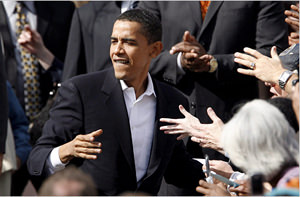 Barack Obama took in $1.3 million Tuesday from an L.A. fundraiser organized by Steven Spielberg, Jeffrey Katzenberg and David Geffen. Hollywood is a crucial pit stop on the road to the White House for Democratic candidates as they build their war chests, especially with so many contenders in the field.

It will be interesting to see how Hillary, Barack and others fare against each other on their trips through town.

Tickets for the star-studded reception were sold for $2,300 – the maximum individual donation for a federal campaign.

The event, at a Beverly Hills hotel, was organised by Spielberg and his Dreamworks studio co-founders Jeffrey Katzenberg and David Geffen.

Mr Obama – one of six Democratic party hopefuls – told the audience they had “enormous power” that comes with “enormous responsibility” because of their impact on American culture.

“Don’t sell yourselves short,” he said. “You are the storytellers of our age.”

Later, a private dinner was organised at Geffen’s home for those who raised at least $46,000 for the evening.