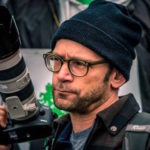 In a mixed, but predominantly white, crowd this was a prevalent sentiment. (Michael Nigro)

Her face gives the impression that someone has just randomly slapped her and then run away. Wide-eyed and statue-still, Kim Ball, a native New Yorker in her mid-50s, stares west down 14th Street, just off Union Square, where she sees hundreds of students, high school- and college-age, in clots along the midafternoon sidewalks. They are marching right at her.

Kim tries to smile. Fails. She tries to raise a fist in solidarity. Can’t. She tries to join in the chant. No words. Instead, she begins crying. Real tears.

Since the election of Donald Trump, reports of hate crimes against people of color, women, the LGBTQ community, undocumented workers and others have flooded social media sites. Somewhere during Trump’s run for the White House, the thin, cracked veneer that was merely clouding this country’s outright racism, misogyny, homophobia and Islamophobia vanished.

What had always been present is now obvious and unleashed. It is muscular. It is ugly. It is extreme nationalism far more pronounced and far more aggressive than, perhaps, some of us care to imagine (or, in some cases, care to admit exists).

“Donald Trump has ripped the lid off Pandora’s box,” Mark Potok, a senior fellow at the Southern Poverty Law Center who monitors hate in extremism, told The Guardian newspaper Thursday.

Potok is right. It is real. It is not an anomaly. It will be aggressive. And we must fight it.

In a matter of hours after the election was called early Wednesday morning, a mushroom cloud of fear seemed to spread across the country. The fear and the violence are not theoretical.

Here is but a smattering of what Trump and his hateful rhetoric have unleashed: Spray-painted swastikas in Wellsville, N.Y. White students in Pennsylvania calling black students “cotton pickers” and snapping out “Heil Hitler” salutes. Muslim women having their hijabs yanked from their heads in California. College women dancing in blackface. A 10-year-old girl taken out of school because a boy reportedly grabbed her vagina and said, “If a president can do it, so can I.” A call to lynch black people at the University of Pennsylvania. White students in Michigan on video chanting, “Build that wall.” The Loyal White Knights of Pelham, N.C., planning a Ku Klux Klan victory parade for Dec. 3.

In New York, my colleague, photographer Cindy Trinh, who shoots under the moniker “Activists of New York,” was assaulted the day before the election by a Trump supporter. Randomly approached on the sidewalk, she was told that her “kind doesn’t belong here” and that “Trump will bomb the shit out of China, so you won’t have a place to go back to when he deports your ass, and you’ll wind up dead in a gutter somewhere.” The man then pushed her to the ground and ran away. Cindy is Vietnamese-American.

Cindy’s story is but one of a handful in which I personally know someone who was verbally or physically attacked.

The morning after the election, my 15-year-old daughter came to me in tears, not wanting to leave for school. “I cannot believe he’s our president,” she said. “Men are going to feel that they have the right to attack us. To rape me.”

This, as any parent or rational human being can imagine, broke my heart. But I will not sugarcoat the reality of what is going on or simply dismiss her fears. She needs to be told the truth.

All the issues — all the current social, economic, human, planetary fights — went overnight from simmer (Obama/Clinton) to pressure cooker (Trump). Neither situation is acceptable.

The slow chipping away of our democracy has been happening for years. Yes, before and during President Obama. But now with Trump getting ready to take the helm, the veneer of “safety” has been stripped utterly away, and everything is up for a profitable grab by those who have the means to do so.

All of that was here before the election. But with Trump being handed the presidential baton and gifted all governmental branches of power, the fight just got so much harder. There is no longer the neoliberal illusion of a safety net.

The conversation with my daughter was much shorter but just as blunt. Her tearful response? “I hate your generation for letting this happen!”

And she should. Her generation has every right to look at us with contempt right now.

As Richard Lynch, a stalwart activist in New York, known as “The Angry Pacifist,” said, “Taking the streets with 10,000 people is easy. Try it with 10.” The white people who have flocked to the street because they feel threatened by a Trump presidency need to sustain the pressure, to engage and, most important, listen to those who have been fighting these threats prior to Election Day.

Lastly, my daughter needs to know that when Kim Ball heard the chants of “White silence is white violence” and then began weeping as the protesters passed her on 14th Street, one random protester, a female student, approached and gave her a hug. And then, after the two separated, another student hugged her … and then another … and another. And it continued until the tail end of the protest moved across the street and into Union Square.

“But that — that right there,” I said, pointing to the last few students crossing the street.

“Yeah,” she said, wiping away her tears and nodding. “That’s what we need.”

I then took her picture. We hugged, and I ran to catch up with the protest. Distribution of safety pins at the “Love Still Trumps Hate” rally in NYC. Americans are wearing safety pins to take a stand against racism, xenophobia and sexism in the wake of the election. (Michael Nigro) Hundreds of students, both high school- and college-age, convened at Washington Square Park in New York City, in solidarity with dozens of other protests taking place across the country. (Michael Nigro) For the third day in a row since the election, protests continued across the country. (Michael Nigro) Richard Lynch, a.k.a. “The Angry Pacifist,” said: “Taking the streets with 10,000 people is easy. Try it with 10.” Protesters march in New York City. (Michael Nigro) Since the election of Donald Trump, reports of hate crimes against people of color, women, the LGBTQ community, undocumented workers and others have flooded social media sites. (Michael Nigro) To my daughters: Know that there are people out there protecting and healing and organizing and fighting. (Michael Nigro)