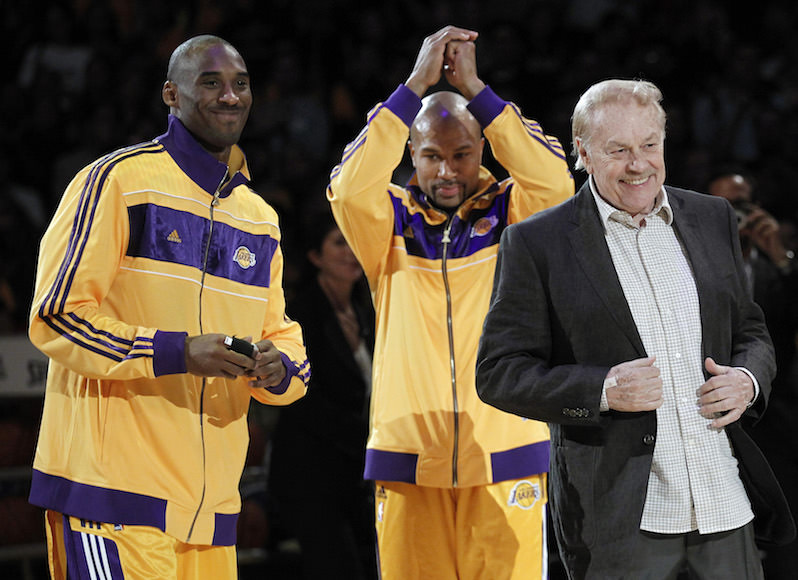 The best, or, actually, the only good thing all season, came last for the Lakers with Kobe Bryant’s 60-point farewell on Wednesday, capping the kind of A-list party the team hasn’t held for years.

The Lakers formally dedicated this season to Bryant—or in other words, kissed it off—to distract fans from the disaster going on around them, breaking the team record for worst record since moving to Los Angeles in 1960 for the third year in a row.

But the Lakers are all out of distractions now. With Bryant goes the last link to their greatness, which was assumed while the team won 10 titles from 1980 to 2010, as movie stars, studio heads and celebrities snake-danced from the Forum to Staples Center.

What’s left for a Laker fan to root for?

Oh, right. One more season like this, and it’s goodbye to Jim Buss, executive vice president of basketball operations.

Scorned by Laker fans, the team’s part-owner said in 2014 that he would resign if the team was not back in contention in “three or four years.”

However offhanded he meant it, his sister and team president Jeanie Buss pounced, saying she would hold him to it if the team wasn’t back—which, she stipulated, meant making the Western Conference Finals—in three years.

That means the Lakers have until next season. As she noted last spring, “My brother understands that we have to continue to strive for greatness, and I think he would be the first one to feel that he would need to step down if he can’t get us to that point.”

Jim never had much actual power, and now he has none. For years, he has gone along with general manager Mitch Kupchak. That’s a good thing, since Jeanie outranked both of them.

Aside from that, Jim has to hope Jeanie lets him stay, according to the wishes of their late father, who just wanted them all to get along.

Laker majority owner Jerry Buss, who died in 2013, left roles in the organization for his six children: four he had with his wife, JoAnn, whom he divorced in 1972, and two boys he had with Karen Demel.

This is known as nepotism in the business world, but for the rich, sports teams are more like toys than businesses.

Team owners claim they must be fiscally responsible as they demand civic support in the form of new arenas and other amenities. Then they let their children run the precious enterprises.

(To their credit, the Busses haven’t hit up local governments. Jerry bought the Forum along with the Lakers. He then developed his team into such a hot property that NHL Kings owner Philip Anschutz built Staples Center downtown for the Lakers to play in as leasees alongside his team.)

The entitlement goes off the chart. Expressing a child’s view from the penthouse, Jim Irsay, the son of Colts owner Bob Irsay, wrote an epic poem about his father’s 1984 moonlight escape from Baltimore.

Daddy called me up on the telephone “Son, are you listening? Are you alone? It’s goin’ down tonight around 9 p.m. The trucks are on their way as soon as I say when.”

Well, the trucks pulled up to Baltimore The people ’round there didn’t want us no more So we packed up our bags and drove out of town And 12 hours later we were Indy bound.

In practice, however, they’re no less avid to turn properties worth hundreds of millions of dollars into a treehouse for the kids, as well as for dad.

Joe Lacob, owner of the NBA’s all-conquering Golden State Warriors, just took a star turn in The New York Times Magazine, acknowledging his team’s accomplishments: “The great, great venture capitalists who built company after company, that’s not an accident. And none of this is an accident, either.”

Lacob’s 27-year-old son, Kirk, is in his third season as assistant general manager, which he worked up to after two years—no, not in the mailroom, but as director of basketball operations.

Kirk graduated from Stanford in 2010, turned down a couple of job offers and then, reported the San Francisco Chronicle, “knowing he could afford to be a little choosy because his parents would help until he got on his feet, Lacob decided to clear his head with a graduation trip to Europe.

“He and his friends didn’t exactly backpack, but they bounced around for a few weeks with limited luggage and happened upon some of the most notable games during the 2010 World Cup.”

Happily, Kirk’s father bought the Warriors that summer, so Kirk didn’t have to go back into the job market.

Nepotism is common in sports. However zany owners’ sons are, they’re accepted as part of the landscape, as in Chicago, where Bulls owner Jerry Reinsdorf’s son, Michael, tilted the balance in the front office, wrecking the season.Michael, installed as president, became close to general manager Gar Forman through their wives and took Forman’s side in a long-running feud with coach Tom Thibodeau.

Thibodeau’s rock-ribbed defensive teams won 50-plus games annually before he was fired last spring after going 50-32. Fred Hoiberg, the nice guy Forman brought in, just led the Bulls out of the playoffs.

Forman, the hired hand, is being flambéed in the press, with scant reference to the Reinsdorfs.

Meanwhile, Jerry Reinsdorf—who let his team melt down again, after sitting back and letting general manager Jerry Krause feud with coach Phil Jackson and Michael Jordan in the 1990s—was just selected for induction into the Naismith Memorial Basketball Hall of Fame.

For her part, Jeanie Buss is the most famous of all the owners’ kids, being the only one ever to pose nude for Playboy. Her father, a friend of Hugh Hefner’s and an avid reader of the magazine, said it was the only issue he didn’t read.

Image aside, Jeanie is highly regarded for her merchandising acumen in the merchandising-savvy NBA, having run the business side of the Laker organization after graduating with honors from the University of Southern California.

Her brother Jim dropped out of USC and didn’t do much of anything. At 38, he trained his father’s thoroughbred horse—on days he felt like it. When Jerry sold the horse in 1998, he invited his son to learn the basketball business, starting out with the No. 4 job, behind him, general manager Jerry West and Kupchak, then assistant general manager.

With the kind of bad timing that seems to dog Jim, he reviewed his new responsibilities for Sports Illustrated’s Franz Lidz, noting: “Evaluating basketball talent is not too difficult. If you grabbed 10 fans out of a bar and asked them to rate prospects, their opinions would be pretty much identical to those of the pro scouts.”

If this was an insult to the front office—where Jim put in rare appearances—at least it showed he knew about bars. The Lakers hired his best friend, Chaz Osborne, a former bartender, as a scout to accompany him on trips.

Despite the familial dysfunction vibrating throughout the organization, the Lakers won five titles from 2000 to 2010.

There was a tacit divide at the top: Jerry and Jim Buss versus Jeanie and Jackson. Jerry wasn’t keen about Jackson’s slow-down triangle offense. They traded jibes in the press, signaling the continuing rivalry between Jim and Jeanie.

The Lakers were more glamorous and got more headlines, but like many teams, they had their own problems with owners’ kids and cronies of all stripes. In the real world, it’s business versus business. In sports, it’s zoo versus zoo.

Crazy as they looked, the Lakers proved they could make it work if the fundamentals were in place. Indeed, there was a clear hierarchy, with Jerry Buss at the top, an experienced front office that was used to turmoil, a strong coaching staff under Jackson and talented teams.

The team got old. David Stern rejected Kupchak’s 2011 trade for Chris Paul in a classic conflict of interest, acting as New Orleans owner with the league, then operating the franchise as well as serving as NBA commissioner. Dwight Howard came and went in one season. Bryant tore an Achilles tendon in 2013 and was never the same.

The last major decision of Jerry Buss was the 2012 hire of coach Mike D’Antoni, passing over Jackson, who by then had left the team and who was the fans’ choice and, of course, Jeanie’s.

D’Antoni, an outsider who gained fame at division rival Phoenix, was scorned by fans who chanted “Phil Jackson” almost from the day he showed up.

Jeanie blamed Jim for jilting Jackson, saying in her memoir she felt as if she had been “stabbed in the back.”

Everyone else says Jerry Buss, not Jim, made the decision. Given Jerry’s preference for D’Antoni’s open-court style over Jackson’s triangle, Jerry, Jim and Kupchak agreed on D’Antoni. That move turned out to be a colossal disaster, and D’Antoni was fired after two seasons and only 67 wins.

In any case, it’s good that the Lakers have shown they can handle their adventures with nepotism. The hot rumor is that Jeanie will hire Jackson to take over the organization when he leaves New York—he has an out in his five-year, $60 million contract in 2017—where he hasn’t been the savior the Knicks envisioned.

Among the Lakers, some things are eternal, even if sound business principles aren’t one of them. Bryant’s Pilot May Have Gotten Lost in the Fog Inside and Outside the 90th Academy Awards Last Call for Vin Scully, the King of Los Angeles