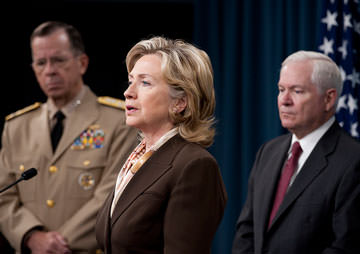 Iraq, Libya, Syria, Iran, Pakistan — there is a long list of countries where Hillary Clinton has championed the use of American military power. But the U.S. is rather sick of bullets and bombs and Clinton’s penchant for militarism, taken with her ties to high finance and more conservative wings of the Democratic Party, leave yet another opening on the left of the presumed presidential candidate.

Beyond the primary, Clinton would most likely face a Republican challenger unencumbered by George W. Bush’s war baggage. Of course we’ll have to wait and see.

As Secretary of State, Clinton backed a bold escalation of the Afghanistan war. She pressed Obama to arm the Syrian rebels, and later endorsed air strikes against the Assad regime. She backed intervention in Libya, and her State Department helped enable Obama’s expansion of lethal drone strikes. In fact, Clinton may have been the administration’s most reliable advocate for military action. On at least three crucial issues—Afghanistan, Libya, and the bin Laden raid—Clinton took a more aggressive line than Gates, a Bush-appointed Republican.

Former administration officials also tell TIME that Clinton was an advocate for maintaining a residual troop force after the U.S. withdrawal from Iraq—an issue of renewed interest given al Qaeda’s resurgence there. They also describe her as skeptical of diplomacy with Iran, and firmly opposed to talk of a “containment” policy that would be an alternative to military action should negotiations with Tehran fail.