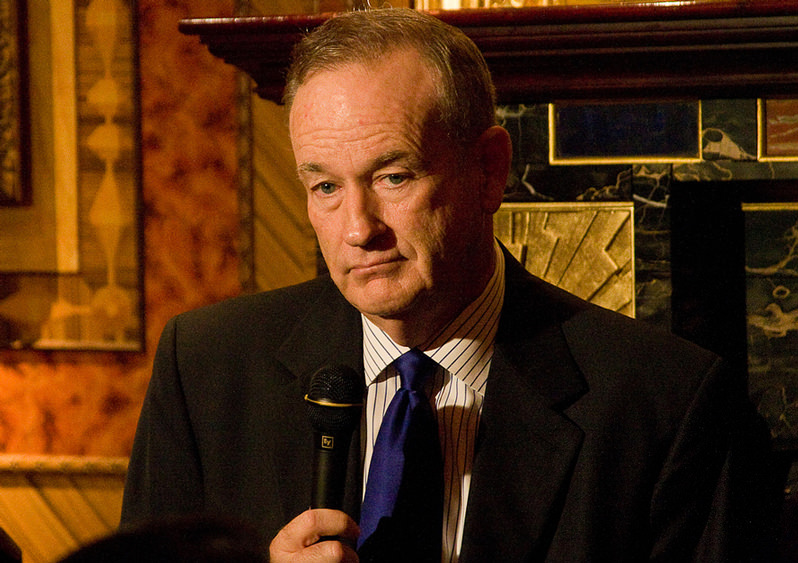 Bill O’Reilly is off the airwaves, but it doesn’t really matter. The despicable strategy of press lord Rupert Murdoch to orient his Fox Cable “news” toward the nativist far right in the United States will continue. They’ll just find another O’Reilly. Worse, there is more or less an O’Reilly in the White House now, with the nuclear codes. Murdoch and O’Reilly in many ways gave us the Trump presidency, running the republic into a brick wall.

1. Trump’s ridiculous and very expensive plan to build a wall between the United States and Mexico? That was an O’Reilly idea. I remember seeing O’Reilly trot it out in an interview with the late thriller writer Tom Clancy after 9/11:

O’REILLY: Now, I’ve been banging this drum for more than a year, and I did a “Talking Points” tonight on it, is that the borders are so chaotic and they’re not secured, and we’re very vulnerable from both Canada and Mexico for people who want to bring stuff in and come in here, and the INS can’t control it. Am I wrong there?

CLANCY: No, it’s one of the problems of, you know, one of the consequences of living in a free and open society. You know, the Statue of Liberty invites people in. She’s not holding a machine gun to keep people away.

Clancy wasn’t exactly left wing. But he tried to warn O’Reilly that crackpot plans like the Wall were a long step toward the US becoming a new Soviet Union. The latter, he said, had failed. Now we have a president with squirrels running around in his cranium, who saw O’Reilly push this nonsense and wants to charge us billions in taxes to build it.

It all comes out of a wounded white nationalism, buffeted by globalization, where African-Americans and immigrants are allegedly stealing jobs (they aren’t).

2. O’Reilly beat the drum nightly for George W. Bush’s invasion and occupation of Iraq. He repeatedly alleged that Iraqi dictator Saddam Hussein was behind al-Qaeda, with the implication that Iraq blew up New York and Washington, D.C. He repeatedly alleged that Saddam Hussein had “weapons of mass destruction” and that he was training al-Qaeda operatives in chemical weapons use at Salman Pak. There is no evidence that that was the case. Iraq had nothing to do with al-Qaeda and was clearly afraid of it. There were no weapons of mass destruction in Iraq.

O’Reilly had said that if there turned out to be no WMD in Iraq, he would become more skeptical of the Bush White House. But despite the collapse of the case against Iraq, O’Reilly went on cheerleading for Bush/Cheney.

3. O’Reilly said on “The View” that “Muslims hit us” on 9/11. Joy Behar and Whoopi Goldberg walked off the set when O’Reilly doubled down on his hate speech and gross generalization. When Trump said last fall “Islam hates us,” he was just echoing O’Reilly.

4. O’Reilly has repeatedly said racist things, and his current troubles began when he said of senior Congresswoman Maxine Waters that he could not get past her “James Brown wig.” In a famous incident on his now-defunct radio show, O’Reilly had professed himself shocked, on eating at a restaurant owned by African-Americans, that the patrons seemed perfectly respectable. He had recently said that Trump won’t be able to help African-Americans because they are “ill-educated and have tattoos on their foreheads.”

Then there was all the other bigotry, as when he compared gay marriage to Goat Marriage.

5. O’Reilly’s denial that any practical measures need to be taken to limit CO2 emissions, because they would disadvantage American corporations. Climate denialism is the original fake news, and O’Reilly & Fox were one major source that Trump scans for news like this.

He’s a mean, mean man. And a bad historian, which yours truly holds against him, hard. He managed to cheapen my America and then he made millions writing “fake history.”

The O’Reilly Factor is dead. But Fox will just go on polluting the airwaves.