After the first round of Democratic primary debates, the line from corporate media and their overwhelmingly centrist sources was clear: The Democrats are moving dangerously to the left, at their own peril.

Washington Post reporter Michael Scherer (6/30/19), under the headline “Democratic Candidates Veer Left, Leaving Behind Successful Midterm Strategy,” pushed the media conventional wisdom—on display after every election, regardless of the circumstances or outcomes (Extra!, 9/92, 1–2/95, 6/04, 7–8/06; 1–2/07; FAIR.org, 11/7/08, 3/16/10)—that Democratic success comes about because of moves to the center, and failure comes from moves to the left: 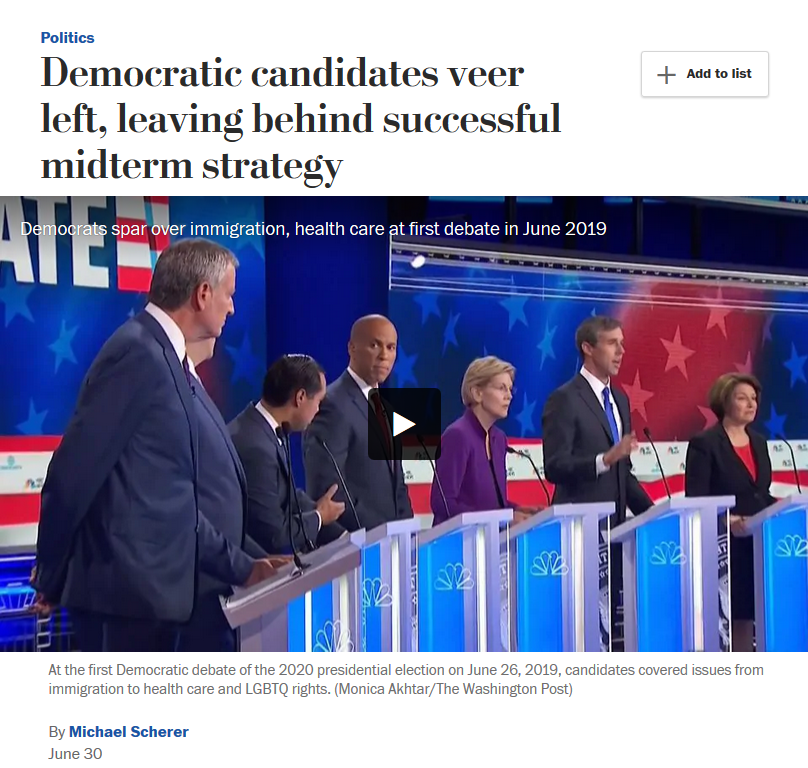 With a full embrace of liberal positions on hot-button issues such as immigration, healthcare, taxes and abortion, the Democratic presidential field has effectively abandoned the strategy that propelled the party to a landslide victory in the 2018 midterms, when Democrats flipped 43 GOP House seats and won 31 districts that Trump carried in 2016.

Never mind that the party’s greatest losses came in the Senate, where three centrist Democratic incumbents lost their seats by significant margins, while progressive Sen. Sherrod Brown held on easily to his seat in increasingly red Ohio—outcomes that seriously complicate Scherer’s analysis (FAIR.org, 11/9/18). The analysis also seems to forget the 2016 elections, in which the centrist Democratic candidate failed to turn out the party’s base in the way Obama did (FAIR.org, 11/27/16).

But given Scherer’s sources, it’s an unsurprising bias: The article’s first “expert” quote was from a Trump reelection campaign pollster, and the next from former DCCC head Dan Sena (who is also, unmentioned by the Post, current advisor to centrist candidate Michael Bennet). A few candidates and their spokespeople on both sides of the left/center divide were quoted, but without exception, all of Scherer’s sources outside of the Democratic campaigns themselves leaned to the center or right. A conservative Republican strategist was given the last word, to suggest that the path the party is taking isn’t likely to beat Trump. 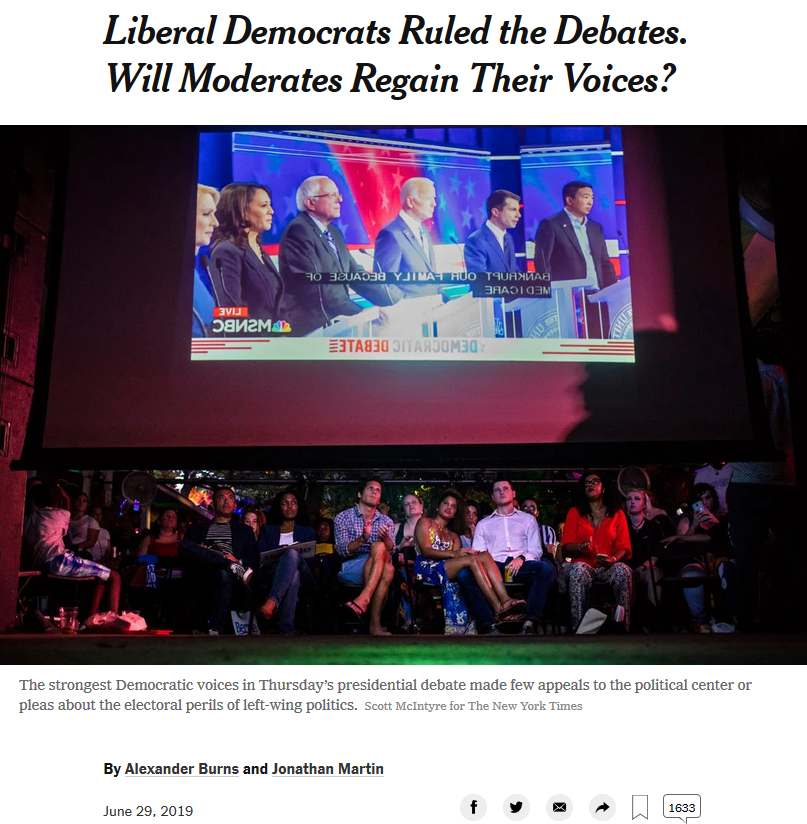 In a news analysis under the headline, “Liberals Ruled the Debates, and the Moderates Are Anxious,” the New York Times‘ front-page story (6/29/19) the Sunday after the debates worried about the “risk of political backlash” from so many leftist ideas, informing readers that “the spring to the left has deeply unnerved establishment Democrats.”

The Times repeats the centrist talking point that the party’s midterm success was grounded in moderation, quoting centrist Democrats Rahm Emanuel, James Carville and Claire McCaskill. The article gives a few lines to “liberals” who “argue that victory in 2020 depends in part on inspiring turnout from young voters and progressives,” but quickly counters that idea with the centrist fears that “the party was squandering the chance to make the election a referendum on an unpopular president, and staking its fortunes on untested policy promises instead.”

It’s worth noting—since the Times does not—that Emanuel in 2017 earned the distinction of the “least popular mayor in modern Chicago history,” bottoming out at a 27 percent approval rating, and McCaskill was one of the three Democratic senators mentioned above who, touting their centrism, lost their reelection battles by wide margins in 2018.

Interestingly, one problem with Biden, the article notes, is that he is “struggling to excite voters the way his counterparts on the left, like Ms. Warren and Ms. Harris, have started to do.” Shouldn’t the fact that voters are excited by left-leaning candidates and not by centrists put something of a damper on the Times‘ analysis? 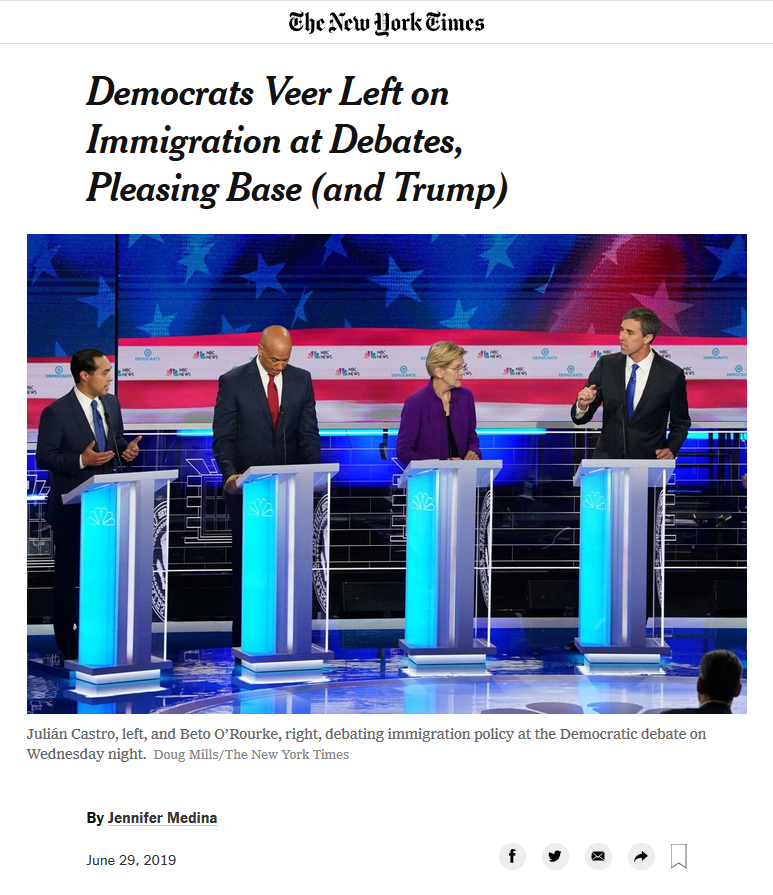 The same day, another Times article (“Democrats Veer Further Left on Immigration at Forum, Pleasing Base (and Trump),” 6/29/19) noted that while some of the immigration positions taken by candidates in the debates

excited many in the Democratic base…the debates also raised questions about whether the Democratic candidates were entering terrain that would be perilous in a general election.

Corporate-backed think tank Third Way, set up specifically to move the Democratic Party to the right, gets room for an extended quote to provide the foundation for the article, predictably urging Democrats to avoid “leaving themselves open to being accused of their own extremism.”

The piece goes on to frame the position taken by many candidates as “complicated”:

While Democrats have increasingly embraced more liberal rhetoric on immigration, decriminalizing the border would undoubtedly prove complicated, and it is unclear precisely how Democrats would direct border officials to deal with illegal border-crossers.

In fact, though the law the candidates seek to repeal goes back nearly 100 years, it was rarely enforced; until George W. Bush, illegal border crossings were typically treated as civil infractions, a history that the article itself partially explains—so it’s unclear why anyone would think it would be so complicated to tell border officials to go back to doing what they used to do pre-Bush.

This unfounded article of faith in corporate media that leftist ideas, in contrast to centrist ones, are “complicated,” radical or otherwise not pragmatic, extends to healthcare. The Post article, for instance, explained that “single-payer healthcare remains a confounding idea for many Americans,” using numbers from the recent Kaiser Family Foundation poll to make its case:

56 percent of the nation favors Medicare for All, compared with 74 percent of Americans who support expanded Medicare as an option for younger Americans in addition to private insurance.

The poll indeed shows this, and it’s unsurprising that people are “confounded” by single-payer since, despite the fact that progressives (including Bernie Sanders in his 2016 run) have been talking about it for years, media have done a remarkable job of keeping the public uninformed (FAIR.org, 3/6/09, 3/15/17).

The very same poll, on the very same page, shows that support for Medicare for All shoots up to 67 percent when they are told it will eliminate all health insurance premiums and reduce out-of-pocket healthcare costs for most Americans, and to 71 percent when people are told it will guarantee health insurance as a right for all Americans. But media—including the first-debate moderators—continue to focus almost exclusively on the elimination of private insurance and on tax increases, ensuring that voters will continue to be confounded, and in a way that particularly benefits the private insurance industry. 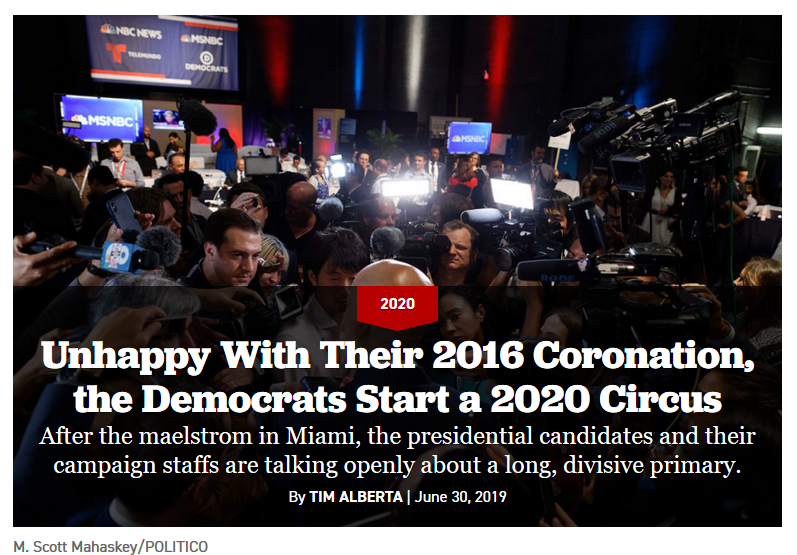 Some in the media felt uncomfortable not just with left-leaning proposals about healthcare and immigration, but also confrontations about race. Politico (6/30/19) allowed that “a measured clash of ideas and worldviews is healthy for a party seeking a return to power,” but drew the line at candidates calling out each other’s problematic positions on racial issues:

What’s not healthy for a party is when the front-runner, a white man, is waylaid by the ferociously talented up-and-comer, a black woman, who prefaces her attack: “I do not believe you are a racist ….”

The piece worried about the many “minefields” that await the party after such a raucous debate, including discussion of “the party’s ambiguous post-Obama foreign policy doctrine”; “pressure to conform to Castro’s argument on decriminalizing border crossings, a position that animates the progressive base but may well alienate moderates and independents”; “whispers of Buttigieg’s struggle with black voters”; and

litmus-test questions on issues such as abortion and guns, not to mention the ideological pressure placed on the field by Bernie Sanders and Elizabeth Warren, neither of whom were seriously tested in the first set of debates but whose ambitious Big Government proposals are driving the party’s agenda and putting more moderate candidates in a bind.

The gravitational pull of the party’s base will continue to threaten the long-term viability of top contenders, as evidenced by the continuing talk of eliminating private insurance and Harris’s own shaky explanations of whether she supports doing so.

Here, Politico betrays its unspoken pre-sorting of the field, which does not correspond to voter preference, as two of the three “top contenders,” according to all early polls—Warren and Sanders—are the very same ones pulling the field left on eliminating private insurance, and reflecting the other concerns of the party’s base. But candidates with “ambitious Big Government proposals” are never considered “top” or “serious” contenders by outlets like Politico (Extra!, 9–10/03).

USA Today’s single post-debate opinion piece came July 1 under the headline, “Lurching Leftward Won’t Beat Trump,” written by Board of Contributors member Tom Nichols, a self-declared “Never Trumper” who characterized Harris’ debate challenge to Biden as “nasty” (without any apparent irony or awareness of the term’s recent history) and criticized “liberal purists” for asking anything more of their candidate than to be capable of beating Trump.

There is no definitive answer to the debate over whether a candidate’s path to the White House is better achieved by mobilizing the party’s base or by winning swing voters. What is clear is that democratic elections ought to engage all Americans, not just the less than two-thirds who currently vote. You would think that more ideas and debate would be preferable to less. But for corporate media, who have never wavered in their adherence to the belief in the centrist swing-voter path, the Democratic primary field is a “circus” that needs to get under control—specifically, centrist control.