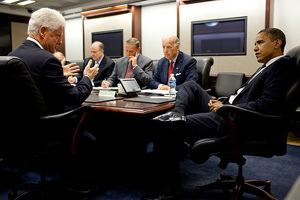 When word went out that Bill Clinton was hospitalized, the prospect that he was in danger made me wish that President Barack Obama had spent more time learning lessons that only Clinton can teach.

Yes, Clinton put his presidency at risk over a sex scandal, and his infuriating moments around the 2008 South Carolina primary disheartened even his most loyal supporters.

But Clinton remains one of the most talented politicians in our history, and it’s not simply because he feels people’s pain or speaks so well that you sit in your driveway to hear the rest of his speech when he’s on the car radio.

Above all, he understands how hard it is to be a progressive politician at this time in history. He appreciates how difficult it is to construct a durable Democratic majority. And he knows how focused Republicans get on regaining power whenever they find themselves on the outside.

And so before we got the happy word that Clinton was OK, I realized what a great loss it would be if he and Obama were deprived of a chance to spend significant time together comparing crises and problems. When you look at Obama’s political troubles after a year in office, it’s remarkable how much they have in common with those Clinton faced at the same juncture of his presidency.

Consider, first, that Clinton, like Obama, started out as a unifier who disdained ideological quarrels and saw himself as a problem-solver. There is not a dime’s worth of difference between Clinton’s war on “the brain-dead politics of both parties” and Obama’s insistence that “there is not a liberal America and a conservative America, there is the United States of America.”

Both sought to occupy the middle ground of American politics. Both believed that they could win over Republicans. Both were sure they could govern differently.

During an interview with Obama back in the fall of 2007, I was struck by just how much he sounded like Clinton when he spoke of the importance of wringing “the excesses of the ’60s” out of the Democratic Party. Then, unprompted, Obama added that “Bill Clinton deserves some credit for breaking with some of those dogmas in the Democratic Party.” Remember, Obama was running against Hillary Clinton at the time.

But Republicans (and in retrospect you can say this was shrewd politics) understood in 1994, as they do in 2010, that allowing these talented icon smashers to govern differently and draw in members of their own party would be fatal to a GOP comeback.

So in Clinton’s case, Republicans voted to a person against his economic recovery plan that — combined with President George H.W. Bush’s deficit-reduction moves — put the nation on the road to budget surpluses. Remember those? And then they killed Clinton’s health care plan.

Under Obama, Republicans have used precisely the same tactics without facing any criticism for a lack of originality. Obama’s stimulus bill got three Republican votes in the Senate, none in the House, and GOP lawmakers rail against it even as they claim credit for projects financed by a bill they opposed. And Republicans are doing all they can to make sure that Health Care 2.0 is ruined by the same political viruses that infected Health Care 1.0 under Clinton.

Confronting the highly disciplined Republicans, Obama and Clinton both had to rely on a Democratic Party whose ranks, especially in the Senate, include a lot of people ready to abandon the battlefield at the first sign of bad poll numbers.

And they share a major weakness: Both believe so devoutly in their capacity to convert adversaries and to get lions and lambs to lie down together that they spend more energy trying to win over their enemies than in rallying their friends. This leaves them helpless when the lions continue to devour the lambs.

I am pleased that after the scary tidings, Bill Clinton is doing well. And it may turn out to be providential that he burst into the news at precisely this point. It’s hard to escape the sense that a young and promising Democratic president is too closely replaying the opening act of another young and promising Democratic president — and that Republicans need only recite the same lines they came up with 16 years ago.

Obama needs to rewrite the script. And as a script doctor, Bill Clinton has no equal.