An empty coffin rests next to steps leading down to the Bagmati River in Kathmandu on Sunday. (AP / Bernat Armangue)

Officials expect the number of people killed and injured in a 7.9 magnitude earthquake that struck Nepal late Saturday morning to rise well above 2,500 and 5,000 respectively.

Dozens of aftershocks, including a powerful temblor on Sunday afternoon, have jolted Nepal over the weekend, forcing thousands of people to shelter where they can. On Sunday afternoon, climbers left stranded by initial avalanches on Everest were again in fear for their lives after a magnitude 6.7 aftershock triggered more avalanches. It also sent terrified residents running into the streets in Kathmandu.

The aftershock was the most powerful since the initial earthquake – itself the strongest since Nepal’s worst earthquake, in 1934, in which 8,500 people died.

An avalanche triggered by Saturday’s quake struck a section of Everest’s base camp, killing at least 17 people and injuring 61 others in the worst-ever disaster on the mountain. The bodies of the dead climbers were recovered on Sunday, while a plane carrying the first 15 injured climbers landed in Kathmandu at around noon local time.

Bhim Bahadur Khatri, a 35-year-old cook and a Sherpa, was preparing food in a meal tent when the avalanche struck. “We all rushed out to the open and the next moment a huge wall of snow just piled on me,” he told The Associated Press. “I managed to dig out of what could easily have been my grave. I wiggled and used my hands as claws to dig as much as I could. I was suffocating, I could not breathe. But I knew I had to survive.” 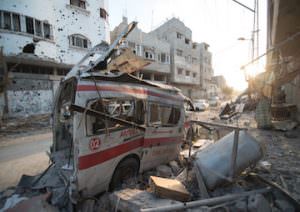